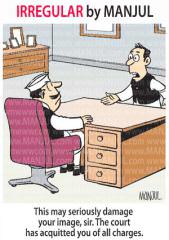 Milan Vaishnav is an associate with the South Asia program at the Carnegie Endowment for International Peace in Washington, D.C. You can follow him on Twitter @MilanV

The criminalization of politics is fast becoming one of the defining features of contemporary Indian democracy, with one in four Members of Parliament facing criminal charges. The situation at the state and local level, though lacking comparable scrutiny, is of a similar order:  of more than 4,000 state assembly constituencies, roughly one in five is home to a sitting politician with at least one criminal case. Based on data collected by the Association for Democratic Reforms, 17% and 21% of corporators in Mumbai and Delhi, respectively, have declared criminal cases.

These facts should banish any doubt that criminality is an embedded feature of India’s post-independence democracy. In order to address this nexus, Member of Parliament Baijayant “Jay” Panda, writing in these pages, has recently introduced three Private Members’ Bills in the Lok Sabha.

To summarize, Panda’s bills would accomplish the following:

Panda is to be commended for snapping a long tradition of parliamentary silence following commission upon commission recommending action.  In my view, it is helpful to think of criminal politicians in India operating in a marketplace of sorts.  As with any functioning market, there are underlying supply and demand factors at work. Panda’s bills would largely address the supply-side of the equation. Yet without commensurate action on the demand side, I fear that Panda’s solutions—if enacted—will be partial.  That does not mean we should not pursue his bills with alacrity; rather, it means we should be aware of the gaps and address them systematically.

In my view, we need to ask two fundamental questions about the “demand” for criminal politicians: why do parties select politicians with criminal records? And, given that parties give tickets to such candidates, why do voters vote for them?

In one sense, the answer to why parties nominate criminal candidates is obvious: because they win. If one were to pick at random a candidate contesting national polls, he/she would—on average—have a one in fifteen chance of winning. On the other hand, nearly one in five candidates facing criminal charges is successful.  Of course, to say that parties pick “winnable” candidates is uninteresting; we want to know what makes them winnable. Let’s begin by stipulating to two facts about Indian elections.

First, political parties in India—virtually across the spectrum—lack credible intra-party democracy. As a result, party elites play an outsized role in choosing candidates and their personal preferences play a large role in selection. Furthermore, ideology is largely an afterthought.  Second, the costs of running a viable campaign have skyrocketed and so parties place a premium on candidates who will not drain party coffers and can “self-finance.”

When it comes to campaign cash, candidates linked to criminality have a distinct advantage: they have access to liquid forms of finance to deploy in the service of politics. Consider a simple statistic drawn from candidates competing in the 2004 and 2009 parliamentary elections: roughly 6% of candidates in the lowest quintile of candidate wealth are under indictment, compared to nearly 20% of candidates in the top quintile. Money and “muscle” are inexorably linked.

Why do voters vote for criminal candidates?

Money is an important part of the story but, on its own, is insufficient as an explanation. After all, political parties can (and often do) fulfill their resource maximization objective by recruiting wealthy but non-criminal candidates. Yet politicians with criminal reputations possess a second advantage.  Research from sites as wide-ranging as urban Gujarat to rural Bihar and southern Andhra Pradesh finds that candidates often use their criminality as a sign of their credibility to protect the interests of their parochial community.

With a demonstrated willingness (and ability) to flaunt the rules, candidates with criminal reputations prove their potential to accomplish two things effectively in a system that often struggles to deliver results. First, they show that they will do what it takes—by hook or crook—to bring home the spoils of power. Second, their reputation helps them keep power by acting as a coercive deterrent against rival groups and supplanting inefficient official channels of conflict resolution.

This argument has far-reaching implications because it suggests that information about a candidate’s criminality is not only available, but is integral to understanding the candidacy’s viability.

What is to be done?

Unfortunately, addressing the demand side of criminality in politics is not quite as easy as devising solutions like Panda’s to curb supply. If the constraint on the demand side were about the lack of information about candidates’ biographies, one could imagine constructing a large-scale awareness campaign.

Alas, the situation is far more complex; but it is not hopeless. As far as parties are concerned, parliament should consider providing the Election Commission of India (ECI) with greater authority to regulate political parties and their activities in ways that make criminal candidates less attractive to party bosses (primarily by making intra-party democracy and transparency in the nomination process a requirement of registering as a political party) and to expose and to curtail illicit finance.

Recent developments in this latter regard do not bode well. For many months, the ECI has been pursuing a case against the former Chief Minister of Maharashtra, Ashok Chavan, for paying off journalists during his 2009 campaign. The government, rather than backing the ECI, has openly challenged the Commission’s power to disqualify a candidate for falsifying election finance reports. As one former Chief Election Commissioner recently wrote: “If the ECI’s powers are curbed, the whole activity of regulating election expenditure will come to a standstill with none having the authority to question and discipline the wrong-doers.”

Improving intra-party democracy and cleaning up campaign finance addresses the incentives of parties, but not of voters. To address voters, we need an honest conversation about the state of civil administration in the country. Here, there are truly no short-cuts to get behind: given the state’s inability to impartially deliver benefits, physical safety and timely justice—in a context of polarized identity politics—voters often view a criminal reputation as an asset, rather than a liability. There is no escaping the reality that the weak Indian state has been a part of the problem, but it is high time parliament makes strengthening it part of the solution.