Selling womb for some ‘baby cash’

Selling womb for some ‘baby cash’ 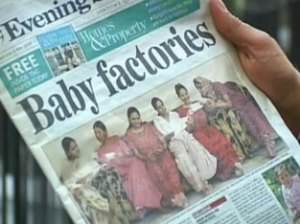 It is 4 PM on a dry summer morning near the west coast of India. Six months pregnant Saira Patel relaxingly sips chai sitting at the front lawn of a hostel. She is a surrogate, bearing a child for a homosexual couple from Australia. They visited and approved of her at the beginning of the contract and will visit once again before the delivery – to take their baby home. Currently Saira lives in a hostel with fifty other surrogates attached to a surrogacy clinic. They all share a sense of sisterhood under the realm of their common experiences. Saira goes for her weekly medical checkups and counselling sessions to the clinic. Her physical & mental health, food and shelter are all being taken care of by the intending parents sitting in Australia waiting for their child/children to be born.

In retrospect, Saira had a completely different life. She lived in a village near the clinic undergoing a financially unstable situation. Worries related to roti, kapdaa & makaan gave her sleepless nights. Dreams she had seen for her children remained unfulfilled. Her husband could bring back little money and her in-laws complained, nagged and harassed her for petty household issues. She could not escape nor could she live like that forever. That is why when approached with an opportunity to earn money by renting out her womb, she instantly said yes. Her family also nodded in agreement due to greed and need of money. However, they had one condition; no one could know about this or else family, friends and neighbours would ridicule and shun them. So sending Saira away to the clinic hostel worked best for everyone – family, intending parents, doctors and Saira herself. This is a common story of an illiterate and poverty-stricken Indian surrogate. Circumstantial push compels her to step outside societal norms and traditional roles.

Gestational surrogacy (surrogate achieves pregnancy by using the intending parent’s or donor’s gametes infused via in vitro fertilization [IVF]) is practiced more often than traditional surrogacy (surrogate uses her egg to achieve pregnancy). In contrast to ‘altruistic surrogacy’, in ‘commercial surrogacy’ the surrogate receives financial incentives above and beyond the required basic expenses of bearing a child. Globalization and economical medical tourism has made India the hub of foreign commercial surrogacy. Since most of the developed countries have either a complete ban on surrogacy (e.g. France and some states in U.S.A) or tight regulation governing its use (e.g. U.K.), India with its minor regulations is a highly preferred market. Moreover, the procedure costs approximately only  $14, 000 in India as compared to $70,000 in U.S.A. Estimates suggest that this industry has an annual turnover of   $2 billion, which is predicted to rise up to $6 billion in the coming years. However, it is criticized for being a “reproductive outsourcing enterprise” instead of being an “altruistic arrangement”.

The intellectual critics suggest that ‘exploitation’ of Indian surrogates should be banned. They further claim that this profitable enterprise belittles the emotions of poor women, takes advantage of their vulnerability and makes motherhood nothing but an economic transaction. However considering the life of an average Indian surrogate, are these just empty words? While living their comfortable lives, can these critics really co-equate their minds with a poor woman trying to make ends meet? In fact, this debate branches off to more questions. First, in a country where unpleasant social situations force women to unwillingly become prostitutes (seeing it as a last alternative to earn and survive); is surrogacy really a bad thing? Not only that, people also have gone to the extent of selling their vital organs to earn bread. If vulnerability can take such forms then, is it fair to deem surrogacy ‘exploitative’?

Having said that, it is important to recognize that ‘exploitation’ is and always will be circumstantially relative.

Second, supply (surrogates) doesn’t emerge without demand (intending parents). So, one cannot undermine the fact that the end result of surrogacy is lifelong happiness for an infertile couple yearning for a child. Third, referring to the first two paragraphs of the article, does Saira’s quality of life seem better before or during surrogacy? Considering the chronic social stressors and poor socio-economic background, her life seems less stressful during surrogacy. ‘Stress Relief Hypothesis’ rooted in psychology suggests that mental health consequences of life transitions are moderated by preceding chronic role problems, meaning that, in some scenarios more stress can act as a relief from existing stress. A poverty stricken woman being promised a better empowering future might not find it more stressful than her current hardships. Therefore, everything is relative to one’s culture, life circumstances and individual aspirations.

However, critics can also argue – isn’t giving up a child nurtured in one’s womb emotionally distressing? The answer is yes, it could be, but research also has an answer to this question. While there is dearth of empirical work on psychological well-being of surrogates in developing nations, a UK-based study conducted by Dr. Jadva (2003) found that surrogate mothers are successful in seeing themselves as carrier of someone else’s child. So, immediately one wonders, wouldn’t a woman whose main motive is to get a better life for her own kids also successfully see herself as a vessel?

Nonetheless, it doesn’t mean all is hunky dory in the world of commercial surrogacy. While the economy reaps benefits of medical tourism based on surrogacy, the government has done nothing to protect the rights of these surrogates. On the one hand, the act of international commercial surrogacy is considered exploitative; and on the other hand, no steps are taken in making the process more convenient and risk aversive for the surrogates. Policies should undertake the following: flexibility over whether the surrogate wants to be in contact with the child after birth, restrictions over the number of embryos inserted via IVF as it is a painful procedure, preserving financial fairness by offering a fixed proportion of money to the surrogate (out of the full amount paid by intending parents) so that middlemen who have opened ‘baby factories’ do not take advantage of their illiteracy and vulnerability. Hence, possibility of exploitation can be wiped off if the surrogate is assured a ‘standard suitable contract’ safeguarding her health, emotional and financial interests.