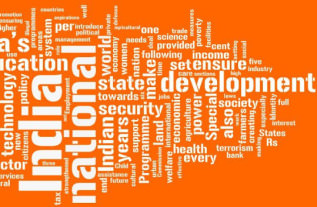 Ajit Phadnis is a doctoral student at the Centre for Public Policy, Indian Institute of Management (IIM) Bangalore. Vivek V. is a public policy enthusiast.

Every Independence Day brings forth a fresh opportunity to revive the debate on our developmental path. Are we undertaking appropriate policies? Are the existing policies being implemented to the optimum? are two recurring questions. Often they are sought to be answered through a complex analysis of factual data and policy evaluations which are rich in insights, but tend to take-for-granted their inherent assumption that policies are created in a political vacuum.

In reality, most policy proposals are severely constrained within the bounds of political discourse, a term that typifies the conversations in political circles. Consider for instance, the case of three landmark policy initiatives of the last decade: the Right to Information, Right to education and Employment Guarantee programme. All of them graduated to policy only after sustained presence in political discourse. Even on few occasions where policy has preceded political discourse, like what happened with trade and investment liberalization, policy implementation has been successful only as far as it has aligned with the incumbent political discourse.

Future innovations in policy have quite clearly to find their parentage in the creativity of the political discourse that exists today. This means that to predict the future of policy, we need to understand the nature of our current political discourse. For instance, are the political conversations directed to explore new ways to enhance farm productivity. Or are they advocating for new tools to enable access to better healthcare? Are we finding new mechanisms to empower the disadvantaged? Or what are the new instruments to empower governance? To investigate this we consider the political discourse contained in the powerful but largely under-leveraged documents, the election manifestos of political parties.

For this study, we examined the election manifestos for the Karnataka State elections in 2013 presented by the three large political parties: the Indian National Congress (INC), the Bharatiya Janata Party (BJP) and the Janata Dal- Secular (JD(S)). The reasons for choosing Karnataka are three-fold. Firstly, because the state had the most recently held elections, the last national elections, in comparison, took place more than four years ago. Secondly, both the prominent national parties INC and BJP presented manifestos here, which in a sense is a precursor to the national battle next year. Thirdly, Karnataka stands somewhere in the middle of the country in terms of its ranking on human development, but at the same time it has demonstrated its capability to be a pioneer for innovation in the  IT, Bio-Technology industries as well as many governance reforms. These attributes make the study of Karnataka election manifestos an engaging exercise.

Cross comparisons of manifestos suggests a broad congruence in the vision of development across the three political parties. While the slogans are carefully customized to align with their respective party ideologies, the Congress’s promise of ‘Clean Governance, able Leadership’, the BJP’s idea of ‘Progress’ and the JD(S)’s focus on ‘Equality & Justice’ do not look considerably different with regard to the issues they propose to address. All three manifestos are strong in their support for agriculture and farmers, promote a conducive climate for investments, promise better governance, envision access to better health and education, advocate for social justice and reflect a growing sense of environment consciousness. Their distinctiveness lies in the specific initiatives proposed to fulfill these common goals.

For the agricultural sector, all parties persist with their long-standing promises of assuring fair price for agricultural produce and supporting farmers in the purchase of agricultural inputs. But in addition the Congress and BJP manifestos also reflect a futuristic vision for agriculture through promotion of Organic farming. All three parties advocate for farming methods that are less water-intensive such as drip irrigation. Encouragement to Solar energy powered irrigation pump-sets are a new initiative reflected across parties.

For attracting industrial investments, the parties have gone beyond their traditional comfort-zones. The Congress advocates for the creation of a North-South corridor of industrial development with a thrust on expediting the process of land acquisition for industries, BJP talks about organizing bi-annual industrial meets and measures to encourage NRI investors. Even the predominantly rural based party, the JD(S), proposes to provide land for industries on ‘very cheap monthly lease basis’.

With regard to the much needed governance reforms, the Congress manifesto reflects a renewed thrust towards decentralization by ‘giving supremacy to Gram Sabhas’, the lowest tier of governance in rural India. Both the BJP and JD(S) mention about local empowerment in towns and cities through constitution of Ward Committees, which adds a new tier of governance at the local level. The subject of decentralization has all along attracted policy advocates, but this perhaps is the first time that such strongly worded proposals are seen in political discourse.

There are also some innovative propositions for health-care delivery. Congress proposes to extend health-care delivery to the doorsteps of individual homes by operating mobile hospital-cum ambulance services. Connecting all rural health centres with tele-medicine is the highlight of the BJP’s health initiatives. JD(S), meanwhile, advocates for a revolution in the health-care system by replicating the system of the National Health Service (NHS) of UK!

The manifestos also reflect a systemic approach to empower women. Both the BJP and JD(S) announce tax incentives to houses that are registered in the name of women. BJP goes a step further in mandating that all government granted houses are to be registered in the woman’s name.

A growing sense of environmental consciousness is visible. A rather concealed consensus exists among parties on promoting solar energy, which occupies a significant chunk of their energy proposals. In addition to this, are programmes for mandating energy audits of buildings, encouraging rain-water harvesting, recycling of water and instituting tax exemptions for electricity-powered vehicles.

These proposals demonstrate a sense of progressiveness in political discourse. One would like to see many of these manifesto promises graduate to policies in the near future. But given India’s checkered legacy with polices, it is only natural that our optimism be peppered with hints of healthy skepticism.

In essence, the manifestos throw light on the fact that our political parties can indeed be thinking institutions. Parties do look beyond their regional and national confines for best practices that can be locally accommodated. The emergence of parties such as Loksatta and Aam Aadmi is likely to further fuel the political discourse and generate a flood of new ideas. There is reason to be optimistic on this Independence Day and to raise a toast to the future of India!