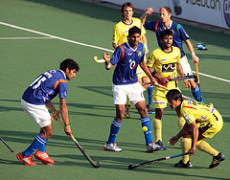 Dhvani Mehta
Dhvani Mehta is a Rhodes Scholar and a D.Phil Candidate in Environmental Law at Magdalen College, University of Oxford.  She is specifically examining forest conservation legislation in India.

In a frenzied news cycle that has been dominated by the headline-grabbing resignation of the Pope, the horrific death of Reeva Steenkamp, and closer home, yet another corruption scandal of mammoth proportions, it is small wonder then that a short news item about the Indian hockey team almost having to pull out of the Azlan Shah hockey tournament went virtually unnoticed. Hockey India (HI) cited the refusal of the Sports Authority of India (SAI) to bear the air fare expenses as the reason for its withdrawal. HI accused the SAI of backtracking on its original funding commitment, even suggesting that this might have been a ‘retaliatory gesture’ in response to HI Secretary General Batra filing a police complaint against a security officer at the National Stadium in a separate incident. The SAI, for its part, insisted that this funding had never been agreed upon. An eleventh-hour intervention by the Union Sports Secretary directing the SAI to allocate funds towards the expenses has averted what would have been a shameful pull-out from one of hockey’s most prestigious tournaments.

This minor drama is hardly likely to have stayed in the public memory for any length of time, assuming that it has managed to impinge on the public consciousness at all. Petty squabbling and turf skirmishes are not new to India’s governing sports bodies. (See here and here). And with the Indian cricket team having made a promising start to its Test series against Australia, do we really want to put a dampener on the national mood with yet another sorry tale about India’s hockey woes? So the extent to which it enraged me took me by surprise, and as I attempted to unearth the underlying reasons for the force of my emotions, I realised that this little episode was representative of at least some of the ills that beset Indian policy-making and governance in general. As with some analogies, this one might appear a bit strained, but I do believe that it throws up important issues that have relevance for our policy-making processes and governance structures in areas other than sport. What follows is an attempt to highlight some of them to encourage deeper engagement with the methods and impulses of policy formulation.

What immediately strikes you about the Azlan Shah near-debacle is the lack of coordination between the many different authorities and the layers of officialdom involved- HI, the SAI, the Union Ministry, all with different but related roles to perform. While specialized bodies and councils contribute crucially to policy formulation through their expertise, and also prevent the concentration of power in a single authority, there is also a real risk that this proliferation of authorities might lead to policy fragmentation. An example of this kind of fragmentation is visible in the field of forest conservation- revenue and forest officials, gram sabhas and Joint Forest Management Committees all take decisions that affect the same physical space and people but which all operate on different assumptions about the goals and methods of environmental law, thus contributing to the poor implementation of the Forest Rights Act. Coherent policy-making in all spheres requires these different authorities to have a sustained dialogue and to take account of each other’s activities. Not only does this lead to more efficient policy-making by avoiding duplication, but it also ensures a common articulation of goals. A comprehensive mapping exercise that demarcates the functions of various statutory bodies in different policy spheres will go a long way towards furthering this, especially by highlighting how apparently unrelated bodies might have an impact on each other’s activities and thus demonstrating the inherently polycentric nature of policy-making.

Just like the last-minute intervention by the Sports Ministry, many major policy initiatives seem to be knee-jerk responses or last-ditch attempts to avert disaster. It took a ghastly gang rape and days of protests by furious citizens to get the wheels moving on a comprehensive reform of sexual violence laws that civil society organizations have been urging for decades. The utterly inadequate Presidential Ordinance that was proposed in response to the Justice Verma Committee report is another indication of the Government’s skewed priorities- unseemly haste is privileged over balanced, deliberative policy-making. Government responses to the Lokpal Bill agitations and the Kudankulam nuclear power plant protests are other prominent examples of shoddy, half-hearted measures adopted in panic to allay public pressure. Sturdy, effective policies require longer gestation periods and comprehensive public consultation if they are to have a lasting impact. Saving the day by springing the airfare for one year isn’t enough; what is needed is a long-term vision for the development of the sport.

Much has been written about the step-daughterly treatment that hockey receives in comparison to cricket despite our former prowess at it. When devising policy, there is a similar temptation to attack the big-ticket problems and appease the more visibly aggrieved sections of the population often at the expense of marginalised, vulnerable groups. A case in point is the failure to acknowledge the doubly harmful impact of rape on Dalit women in recent reforms to India’s sexual violence laws. Similarly, India’ climate change negotiating position, with its refusal to accept binding greenhouse gas mitigation requirements, appeals to popular ideas about its right to growth and development, but fails to recognize that the brunt will be borne by some of its poorest citizens. If it is to be legitimate, policy-making must internalise procedures that assess and take into account the policy’s impact on the weakest sections of society. A famous Test series win over Australia will be doubly celebrated if it is accompanied by participation, if not success in other sporting endeavours.

In sporting terms, this post has only prepared the pitch and marked out the goal lines for a meaningful debate on policy reform. A detailed game plan is now needed to set into operation some of the themes touched upon.