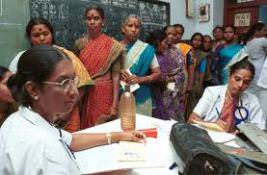 The three waves of feminism seem to have overlooked the Indian shores. We are a country where any conversation about gender issues tends to get lost within layers of complexities ranging from predominantly patriarchal societal norms to misrepresentation of women in government offices. The issue of women’s health weaves through all of these layers and emerges as one of the most complex, yet one of the most poignant issues of the day. Mr. K.D. Singh brought up the issue of sanitation and drinking water facilities in his post. I will try to delve deeper into the healthcare issues of Indian women.

Indian healthcare stands on a unique ground for a variety of reasons, the most obvious one being the lack of a well defined healthcare system. The rural-urban divide in healthcare facilities is representative of the dichotomous nature of almost all aspects of living in India. The uniqueness of our position does not end at a gaping chasm between the preventive and treatment facilities available to the populations in these areas: it extends to the disease spectrum that our population is heir to. On the one hand we have one of the heaviest burdens of lifestyle diseases like diabetes mellitus and cardiovascular disease, and on the other hand our infant mortality rate and our maternal mortality rate remain among the worst in the world. While the prevalence of diseases like cancer requires cutting edge medical science for control, we also have heavy disease burdens of completely manageable conditions like malaria, dengue, malnutrition and anaemia.

Add to this the unique position the Indian woman finds herself in. That our society’s patriarchal methods have led to disastrous consequences for women is seen statistically in our persistently skewed sex ratios. Female foeticide still remains at large despite the Pre Natal Diagnostic Techniques Act coming into effect nearly twenty years ago. Our maternal mortality has improved slightly and we are now at 212 maternal deaths per 100,000 per year; but this is far from the MDG target of 109 by 2015. (We are much closer to attaining the MDGs in areas like Infant Mortality, HIV/AIDS control, Malaria management: which probably hints at inadequate efforts invested in understanding the situation of maternal mortality in India).

Even when we put gender-specific public health issues aside, Indian women are faced with a plethora of completely preventable but utterly mismanaged conditions. Seventy-five per cent of pregnant women are anaemic from low levels of iron. In a country that can’t really boast of basic public amenities for sanitation, it is the women that bear the brunt of our Open-Toilet culture. From the obvious public health disaster that an undeveloped sewage disposal system is to the lack of menstrual hygiene, the problem of sanitation in women creates a domino effect that affects not only their health and the health of their children; it also results in adolescent girls dropping out of school for fear of embarrassment.

This brings me to the taboos associated with womanhood that have ingrained themselves in our culture. Menstruation is shameful, sex education is a far cry from reality, and domestic violence in most segments of the society is so well-rooted that it is considered a way of life. The infamous Delhi gang rape case of last December brought about social mobilization that, if sustained, can be the beginning of change. But it’s important to realize that violence is as much a public health issue as it is a social one. The signs of violence need to be identified, proper medical care systems- both physical and mental- need to be in place for victims of violence. Most importantly, public health campaigns to promote awareness of ongoing violence and human rights movements at the grassroots level need to be targeted towards women, so that they can take charge of their own lives- the one thing that hasn’t happened in sixty six years of independence.

While health policies like the Janani Suraksha Yojana are a great way to promote safe healthcare practices among women, monitoring their efficacy is vital if any real change is to be brought about. Training Anganwadi workers, ASHAs and ANMs in the community has been a good step to empower women while improving the health of their communities. But again, even with regular training programs in place, their actual efficacy must be monitored by an external agency if we want to see results. Without an actual measure of the results that a policy brings about, all policymaking is mere tokenism in the name of governance.

It is well known that several healthcare plans have been put forward by the planning commission; most of them are well rounded and well researched initiatives. The real problem lies in their implementation or lack thereof. WHO recommends that governments spend at least 5% of their GDP on healthcare. In India’s fledgling attempts to achieve this, we have only managed to spend 3.9% of our GDP on healthcare- an even lesser amount on issues specific to women. Funding is only one part of the picture. We need people working at the grassroots level on issues of sanitation, safe births, violence, nutrition- and we need impartial, third-party review of their work.

The issue of women’s health as a whole needs to be broken down into components. We need the government to work in collaboration with NGOs, individuals and organizations with vested interest on these components. And we need periodic reviews of the larger picture for targeted improvement. While the problem may seem insurmountable, it can be tackled by persistent dedication and action.