Getting this Straight: Decriminalising Gay Sex is an Idea Whose Time has Come

Getting this Straight: Decriminalising Gay Sex is an Idea Whose Time has Come 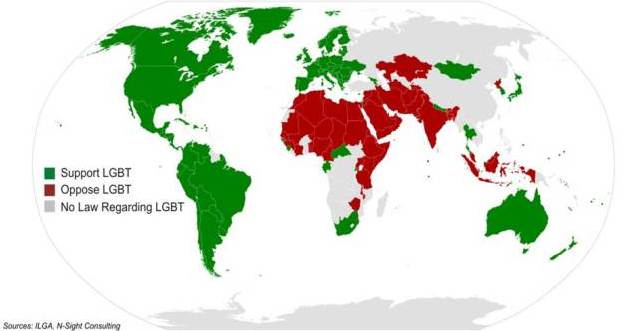 India in respect to the world order on LGBT legilsation

Karan Singh looks at the medievalism of the criminalisation of gay sex, and grounds his argument for the reversal of the Supreme Court judgment in India’s long history of social reforms.

Karan Singh is the founder and CEO of N-Sight Consulting. He is an alumnus of the University of Oxford and the London School of Economics (LSE), the Indian Institute of Management (IIM), Bangalore and The World Bank Institute.

On 11 December 2013, the Supreme Court of India overturned the 2 July 2009 Delhi High Court judgment decriminalising gay sex between consenting adults, bringing with it an avalanche of emotions, ranging from disappointment and betrayal to satisfaction and relief, from people who waited for the verdict but for diametrically opposite reasons. The subsequent political and media discourse was as much rooted in the religious beliefs, political climate and social conservatism as in human rights, personal freedoms, liberty and equality, and public health. Perhaps the sense of anticipation surrounding the verdict would not have heightened, or reached stratospheric proportions, had the apex court of the land itself not raised the bar, and with it people’s expectations, by delivering progressive judgments in the past. But as it turned out, the court, in its wisdom, lobbed the ball, as it were, into Parliament’s court, leaving it to the latter to take a view on suitably amending Section 377 of the Indian Penal Code, which is a 19th century relic of the British colonial era.

A reading of the relevant portion of the text of the Supreme Court judgment, though helps one to understand the position of the two-judge Bench, which, to my mind, did not want to be accused of judicial overreach or activism. It reads: “After the adoption of the IPC in 1950, around 30 amendments have been made to the statute, the most recent being in 2013 which specifically deals with sexual offences, a category to which Section 377 IPC belongs. The 172nd Law Commission Report specifically recommended deletion of that section and the issue has repeatedly come up for debate. However, the Legislature has chosen not to amend the law or revisit it. This shows that Parliament, which is undisputedly the representative body of the people of India has not thought it proper to delete the provision.” However, the sense of disappointment in the LGBT community stems from the fact that the limited question before the Supreme Court was whether gay sex between consenting adults should be deemed a criminal offence under Section 377 of the IPC, punishable with up to life in prison. In the instant case, other issues confronting the LGBT community, such as legitimising a gay marriage, as has been done in some countries where the discourse has gone beyond the criminality or otherwise of gay sex, were not under consideration. Also, for the Supreme Court to dismiss the LGBT community as a minuscule fraction of India’s population was a travesty of justice.

To my mind the Supreme Court’s judgment in the matter should not necessarily mean the end of the road for the LGBT (lesbian, gay, bisexual, transgender) rights in India. Decriminalising gay sex is an idea whose time has come and I have no doubt in my mind that the legislature and the judiciary will eventually have to rise to the occasion.The government has filed a “review petition” asking the Supreme Court justices to re-look at the case. The review petition had to be filed within 30 days from the date of the judgment. There are other options available to the government. It could file a “curative petition” so that the case could be decided by a larger, five-judge Bench. It could also issue an ordinance till Parliament takes a view on it. Unfortunately, though, the response from the political parties has been more opportunistic than optimistic. The Congress party, which heads a coalition government, made the right noises, but shied away from committing to bringing about an ordinance. Ironically, this is the same party and ruling coalition that deemed it fit to okay an ordinance to negate the Supreme Court verdict on convicted lawmakers. Similarly, in the 1980s, the same party had passed an ordinance followed later by an Act after the outrage over the Sati by a woman in Rajasthan. The BJP, which is the principal opposition party, did not take a helpful stand either. The stand of the other parties of consequence can be described as hypocritical.

In the interest of the LGBT community, one expects the manifestos of political parties for the 2014 Lok Sabha elections to categorically commit themselves to bringing about a suitable resolution of the issue within a declared time table. In the event the judicial options do not succeed, there is still Parliament that can decide on the matter and the apex court passing the buck to Parliament need not be entirely unwelcome. A careful reading of the history of social reform in India will show any number of instances when legislations have been brought about in response to an overwhelming demand from a section of the society to address the issues of the day. The abolition of Sati in 1829 and the enabling of widow remarriage in 1856 are a case in point. Similarly, a 1872 law allowed inter-caste and inter-communal marriages and in 1891 a law was enacted to discourage child marriage.

In the 21st century there cannot be a justification for perpetuating centuries-old prejudices. On any metric, be it religious belief; politics; social custom; human rights; freedom, liberty and equality; and public health, there is a compelling argument to be made for the repeal of Section 377. This section of the law is as archaic as, say, a rule under the Narcotic Drugs and Psychotropic Substances Act that makes it difficult for terminally-ill patients to procure morphine for medical use, thus condemning them to a life in pain. As public health agencies and experts have been warning the government, treating the LGBT community as criminals makes it harder to take HIV/AIDS programmes to them. According to the UNAIDS, the Delhi High Court decision had restored dignity for millions of people in India, and was an example of the type of reform we need for supportive legal environments that are necessary for effective national AIDS responses. The UNAIDS also said that it wanted the government and civil society to be able to provide HIV information and services to all people, including gay and other men who have sex with men, lesbian, bisexual and transgender people, and for them to be able to access the services without fear of criminalisation. Again, for every religious leader who views the LGBT community with distrust there is also a Sri Sri Ravi Shankar who has come out openly in their support. “Homosexuality has never been considered a crime in Hindu culture. In fact, Lord Ayyappa was born of Hari-Hara (Vishnu & Shiva). #Sec377,” he said on his Twitter account.

After considering all these factors, on balance, it cannot be denied that there is merit in the argument that the Supreme Court verdict is regressive and retrograde. In one fell swoop, the court banished the sexual rights of the minorities back to the Stone Age. India finds itself back in the dubious company of countries such as Iran and Saudi Arabia, which regard the LGBT community with suspicion. This medievalism does not bode well for as ancient a civilisation as India, which gave to the world Kama Sutra and the temples of Khajuraho.