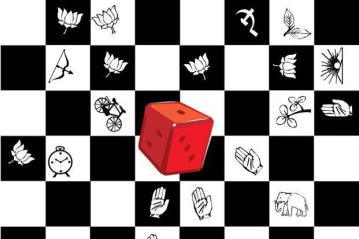 Although the public discourse surrounding the 2014 general elections seems to be centered on the effects of a “Modi Wave”, Mathew Idiculla stresses the need to remember that elections in India are ultimately a multi-polar contest fought over varied issues.

Mathew Idiculla is a graduate fellow at the Law, Governance and Development Initiative in the School of Policy and Governance at Azim Premji University, Bangalore.

That 2014 would be a year of change seems inevitable. Whichever political formation wins the upcoming national elections, India will soon have a new Prime Minister after nearly a decade under Manmohan Singh. But beyond a mere change of guard, this election has the potential to alter the political and economic trajectory of India. This is not merely because Congress is projected to get one of its lowest ever tallies as per most opinion polls, but also because its chief challenger seems to embody a thought quite different from that held by all previous prime ministers.

2014 could very well be remembered with other landmark years in India’s political history- 1967, when Congress domination ended as it lost power in half the states; 1977, when for the first time Congress was unseated from power at the centre and 1984, when Congress won its highest vote share ever and had for the last time a member of the Nehru-Gandhi family as the Prime Minster. In terms of economic policy, 1991 saw a major policy shift in India with the opening of the markets which was further taken forward by the BJP led NDA government. However, since 2004, India has followed an “inclusive growth” model which sought to go beyond economic growth and focused on delivering social welfare by enacting various socio-economic rights. But with economic growth lowering to 5.5 per cent this year and rising inflation, the viability of this model is under the scanner and the policy priorities of the next government could hence undergo a major shift.

National Elections are often, but not always, fought on certain big issues. 1977 was in many ways a referendum on the Emergency, 1989 was mainly fought over the corruption allegations against the Rajiv Gandhi government and 2004, arguably on whether India was shining. In 2014, beyond the constant reference to a “Modi Wave” supposedly sweeping the country, no major issues seems to dominate public discourse. Nevertheless, “development”, “good governance” and “empowerment” seems to have become common references in the political lexicon of 2014 elections. In many ways, both NarendraModi and Rahul Gandhi (albeit less successfully) are positioning themselves as change agents trying to bring in a new language of politics.

BJP’s appeal to the voters has been primarily on two fronts- that the corruption-ridden UPA government has ruined India and that Mr. Modi, with proven administrative credentials, can deliver India to prosperity. The party, which still has problems of geographic reach, is clearly hoping that this election will be a “wave election”centered on Modi, like the 1971 election in which Indira Gandhi directly appealed to the masses with her populist rhetoric. The Congress is less clear on its messaging, but seems to be promoting its record in delivering “growth with social justice” and is pitching Rahul Gandhi as someone who wants to take this process of empowerment to the next level. The Left has got a few regional parties together in an arrangement which is asking for alternative economic policies and also a bigger role for the state governments vice-vie the centre. The latest kid in the block, the Aam Aadmi Party, has continued its anti-establishment style politics by focusing on how both national parties are under the control of Big Business.

The Multi-party system and Elections 2014
While the rise of Modi at the national stage-whether achieved by a carefully calibrated media strategy or due to genuine groundswell- cannot be denied, it seems to cloud out the multifarious voices that make up Indian politics. In viewing Modi’s popularity as an unstoppable wave or tsunami, there is a danger of missing out many parallel political mobilizations and the multiple possibilities that the Indian electoral minefield offers.

Despite the fact that India follows a first-past-the-post electoral system that favours bigger parties,the truth is that our party system has increasingly become more fragmented. The number of parties contesting the elections has increased from 33 in 1984 to 230 in 2004 and to 363 in 2009. A more accurate measure of increasing party fragmentation is an index that political scientists use-Effective Number of Parties (ENP). The ENP measures the actual level of competition that exists in each constituency based on the vote share that each party gets. Even in these terms, the party fragmentation has increased with the effective number of parties increasing from being 4.53 in 1952 to 7.98 in 2009 (Shridharan, 2011).

While everyone seems to accept the importance of alliances (no party has achieved a majority in the seven elections since 1989), due to three stable coalition governments over the last 15 years, elections are now increasingly perceived to have become bipolar. But an analysis of the ENP numbers reveals otherwise. Since 1999, though India had stable coalition governments in place, the ENP increased from 6.74 in 1999 to 7.60 in 2004 to 7.98 in 2009. This means that the general elections are now essentially fought by around 7-8 major parties and not just the 2 big national players.

Even if we consider the combined vote share of BJP and Congress in the same period, the story of vote consolidation by the big national parties rings hollow.  The combined vote share of BJP and Congress put together has been declining from 52.1 in 1999 to 48.6 in 2004 to 47.4 in 2009 (Shridharan, 2011). The decline in vote share might be partly explained by the ability of the national parties to enter into pre-poll alliances. Even then, these figures reveal that Indian politics is much too diverse to be captured by any single phenomenon.Whether any form of “wave” can reverse this trend remains to be seen.  A wave could stagger this trend, but to substantially reverse it would be difficult. Though political parties have now learned the trick to maintain durable coalitions, it would still be premature to suggest that the 2000s and 2010s represent an era beyond the electoral fragmentation of the 1990s.

The Issues that Matter
But how do the voters see this election? Do they view it merely as a Modi-versus-Rahul personality contest as the mainstream media seems to be projecting it? Or are they more concerned with the local issues of their constituency?

The Center for the Advanced Study of India at the University of Pennsylvania, with the help of the Lok Foundation, recently ran a poll survey on the social attitudes in India with 68,500 respondents across 24 states. Interestingly, it found that issues concerning the economy had the largest resonance among the people. When asked to pick the single most important issue (among a list of 8 provided) that will determine their voting choice, economic growth emerged as the number one issue with a 25 % vote share. It was followed by corruption (21%) and inflation (18%). Interestingly, issues related to identity ranked last with only 3% of the people selecting it as the most prominent issue.

These figures may tempt analysts to jump to the conclusion that India is now heading for a post-identity based polity in which issues of caste and community no longer matter. However, such surveys need to be read with caution, especially when it is commonly acknowledged that in surveys, people tend to give the answer that they believe the surveyor wants to hear rather than what they actually believe. Also, when the same survey asked the question about caste indirectly, 57% admitted to being uncomfortable with the idea of someone from another caste being their elected representative.

It is actually quite surprising that an abstract idea like economic growth emerged as the most important issue for the voters. But then, topics like food, housing, water, health or education were never part of the survey list.  Whether voters ultimately vote on the basis of local issues that matter to them in their daily lives or larger national issues is something that needs to be further examined.

The question of local versus national is interestingly being played out in the election at Bangalore South constituency between Infosys CEO turned Congress politician Nandan Nilekani and BJP general secretary Ananth Kumar. Ironically, it is the debutant Nilekani, who just finished a 5 year stint in Delhi as UIDAI chairman, who is talking about Bangalore’s local problems, whereas the 5-time MP of the city is fighting the elections by attacking the central government and asking for a vote in Modi’s name. The reasons for such electoral positioning seems obvious- Nilekani does not want the controversies of the UPA government to affect his campaign while Kumar does not have enough to show for his record as an MP and hence seems to be banking on the Modi “wave”. So, this election promises to be an interesting contest where local, state and national issues compete with each other and ultimately becomes intertwined in determining the fate of the biggest electoral battle in the world.