The Puzzle of the BJP’s Muslim Supporters in Gujarat

The Puzzle of the BJP’s Muslim Supporters in Gujarat 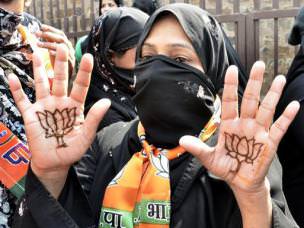 Image credit: Hindu Centre
Raheel Dhattiwala examines a political phenomenon in Gujarat: the support of Muslims for the Bharatiya Janata Party (BJP) that many Muslims perceive as responsible for the brutal violence in the State in 2002 when at least a thousand Muslims were killed. The findings are based on 23 months of ethnographic fieldwork — in periods spanning three elections in 2010, 2012 and 2014 — and an analysis of 101 polling booths in Ahmedabad city.

The following article is a summary of a policy report by the author.

Are Muslims shedding their resentment for the BJP and voting for it? The potency of this question is greatest in context of Gujarat where it gained significance soon after the BJP’s political rapprochement with Muslims in 2009. This report attempts to answer why Gujarat’s Muslims would support the BJP, a party that many continue to acknowledge as having perpetrated violence against Muslims in the State less than a decade ago. In doing so, it examines the profile of the BJP Muslim supporter and what ‘support’ actually means.

Findings of this report are primarily based on in-depth fieldwork evidence spanning three election periods in Ahmedabad city (2010 to 2014). Indeed, interview evidence suggests an unprecedented surge in public support of Muslims for the BJP in this period. Motivations of support varied for those Muslims who had joined the party as members, from those who were supporters/campaigners for the party. For Muslim party members, political patronage of a party deemed to stay in power in the State was a strong incentive to vocally support the BJP as opposed to value rational incentives for the supporter/campaigner (“to get rid of our anti-national image we have to be with the BJP”). Common to both groups of supporters was the effect of personal experience of the violence. A Muslim with direct experience (e.g. death of a family member) of the violence in 2002 was least likely to voice support for the BJP.

At the same time, inferences drawn from 101 polling booths in seven assembly constituencies in Ahmedabad highlight a distinction between public and electoral support: more Muslims were likely to have supported the BJP in public only, than going out and voting for it as well. This is plausible given that anonymous referendum implies the possibility of public behaviour being distinct from electoral behaviour. The sample booth analysis suggests not more than 10 per cent votes were cast by Muslims for the BJP. This figure is not very different from Muslim voting for the BJP in Gujarat in the years prior to 2009. Of course, making ecological inferences from booth-level data has its own set of caveats, which further highlights the uncertainty of claims— “over 30 per cent Muslims voted for us”—made by the BJP from constituency-level aggregate figures.

Contradictory behaviour—high public support but low electoral support—could be an outcome of the absence of a space for dissent or a ‘hidden transcript’ for Muslims leading to expressive dissonance that limits the articulation of true feelings. Plausibly, for a Muslim who believed that the BJP is an anti-Muslim party, the new knowledge of the BJP’s inclusive measure to represent Muslims in the party could be inconsistent with the awareness that the BJP is anti-Muslim. If this Muslim individual chooses to support the BJP for potential economic gains expressing his original private belief might now invite social disapproval from the majority Hindus for opposing an inclusive government and from his own community for opposing a government that seeks to make amends and provide benefits. Notably, public support for the BJP among Muslims had decreased by 2014 advocating the pattern seen in the booth-level findings. The absence of Muslim representation in the BJP in the 2012 elections and with “no tangible benefits” the social pressure to conceal misgivings about the BJP is likely to have reduced.

Although Muslims displayed far greater public support for the BJP than voting for it, booth-level data suggests that poor Muslims were more likely to vote for the BJP than affluent Muslims; Muslims voters living in intermixed neighbourhoods were more likely to vote for the BJP than those living in Muslim-majority enclaves and ghettos; and, contrary to fieldwork evidence, there is little evidence that Muslims in areas without violence were more likely to vote BJP than were those from areas with violence. These are, albeit, tentative inferences because the sample is restricted to homogenous booths and the range on the bounds of voting overlaps. What it does illustrate is that interview evidence may not necessarily match behavioural evidence, thus providing good reason to conduct much more systematic booth-level analysis that enables localised inferences.

What are the implications of these findings? First, given the substantive evidence of electorally-motivated ethnic violence in India, institutional autonomy of the keepers of law and order ought to be encouraged. Related to the first is the need to strengthen legal provisions that ensure that the state be held accountable for future episodes of violence. In absence of legal provisions, ethnic minorities who are not electorally rewarding will continue to face the dilemma of the Muslim voter of Gujarat today caught between the need for state resources and their own moral dissonance. Third, the dependence of electors on political parties for patronage-based incentives often compels them to either act as political intermediaries themselves by becoming members of the incumbent party or rely excessively on intermediaries who facilitate exchange of resources between voter and state. Campaigns that educate voters about the political process, incumbents and candidates could reduce their dependence on political intermediaries and lead to transparent voter-politician interface.

This article originally appeared on the website of the Hindu Centre for Politics and Public Policy where Raheel Dhattiwala was a Public Policy Scholar at the time of carrying out her research. She completed her doctoral studies in sociology from Nuffield College, University of Oxford.

Update: Dhattiwala & Susewind (2014) carried out further systematic analysis of Muslim vote in 2014 in the states of Gujarat and Uttar Pradesh, the results of which were published in the Economic & Political Weekly.