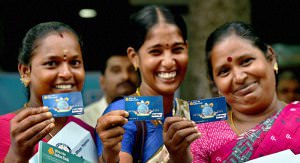 “The guiding principle in any attempt to create a world of free men must be this: a policy of freedom for the individual is the only truly progressive policy.”

-Friedrich Hayek, The Road to Serfdom, quoted by Miller and Kim

Over the past few months in India, the political and economic climate has been undergoing an undesirable change, where the current government, in its attempt to work for everyone’s economic development, compromises on the state of economic freedom. There have been no apparent drastic positive changes in the country’s economic and business environment; on the contrary, evidence from performance indicators (such as industrial productivity levels, export trade data, openness to FDI, Business Confidence Index, etc.) presents a clear negative trend.

Since the last year, in spite of the government’s rich electoral mandate in the lower house of the parliament, it has failed to initiate and implement the key economic reforms  it has been pressing for (e.g. cleaning up the mess with GST, the Land acquisition bill, etc.). If I am to believe the words of our Prime Minister and his party, the focus of the government is to achieve higher growth for the economy while catering to other developmental objectives like skill development and employment generation through the increased role of Public Private Partnership (PPP) model (where the government will involve and work jointly with the private sector on welfare issues).

However, what seems to be missing from this approach – and is also the fundamental problem with the very vision of the government (including previous regimes) – is a failure to realize a holistic vision for the economy, one which goes beyond obsession with growth parameters to development of an economically “free” society. The inherent value of economic freedom needs to be considered by the governments in power, both at the state and centre levels, as the ultimate goal. This article is an attempt at explaining the meaning of economic freedom in today’s context and how relevant it is for developing economies like India.

In the first chapter of the 2015 Index of Economic Freedom report, Ambassador Terry Miller and Anthony Kim further explain, “[In The Road to Serfdom,] Friedrich Hayek’s keen insights into economic freedom are based on the moral truth that each person is, as a matter of natural right, a free and responsible being with inalienable dignity and fundamental liberties that righteous and effective political systems should regard as unassailable” (my emphasis).

This applies best to the idea of a developing economy trading more “freely” (within or outside a region) which allows it to grow with more income and access to resources, and to unconditionally converge with the income levels of wealthy countries. Similarly the presence of quality public and private institutions that help ensure property rights, appropriate regulatory structures, along with the autonomy and independence of the judiciary, prevent the bureaucracy (i.e. the executive wing) in an economy from taking the system for granted. All this holds vital importance for economies in not only successfully growing over time but moving towards an economically free society, ideally displayed by economies such as Singapore, Hong Kong, Australia, and New Zealand (also ranked as the “freest” economies in the index discussed below).

A country like Botswana in Africa which Daren Acemoglu, Simon Johnson, and James Johnson wrote about way back in 2003 still presents itself as an interesting case study. Over decades, the government heavily invested and intervened in the economy and the public sector accounts for a larger share of the economy—an uncommon feature in African economies. The institutional arrangements present in that country ensure protection of property rights of actual and potential investors. Effective state intervention and governance have ensured a more “free” functioning society within their economy. By using the term “free” I do not argue as an absolute free market proponent, but stress the importance of the fundamental values of openness and, transparency in effective governance by a state in emerging economies.

While in theory and in an ideal scenario, this may sound great, in practice, there is a need to identify tangible parameters that measure economic freedom in a way where policies can be framed by the state to guarantee and protect it. A lot of development economists and noted scholars since Amartya Sen like Pranab Bardhan, Mrinal Datta Chaudhuri etc. have worked and written extensively on the idea of development as freedom, state directed development and  how it is the job of the state to invest in creating social opportunities for its people (through investments in education and healthcare, along with trade liberalization and physical investment needs). But a study on measuring economic freedom as a precursor to economic development computed through an index is a rich find and one that needs to be valued.

The Index of Economic Freedom computed by the Heritage Foundation (US) is one such critical measure that helps us in taking the concept of this approach forward while being pragmatic to a country’s economic profile and scope. India’s economic freedom score is 54.6, as per the 2015 Index, making its economy the 128th freest. As per a recent report,

“India’s score  is down by 1.1 points from last year [i.e. since the current government came in power], with meek improvements in the categories of busi­ness freedom, property rights, and freedom from corruption offset by declines in labor freedom and trade freedom.” India is ranked 26th out of 41 countries in the Asia–Pacific region [China ranks 30th], and its overall score continues to be below the regional and world averages.”

In the same Index, China is ranked even below India, being the 139th freest. One of the major reasons for this is because of its poor performance in the Rule of Law, Regulatory Efficiency, and Open Market categories. For example, China (when compared to the world) ranks 138th in Property Rights, 147th in Business Freedom, and 158th in Investment Freedom, despite being defined as one of the most economically powerful countries today.

India, being a multi-party democracy unlike China, may be doing better in most of these categories, but still has a long way to go when compared in terms of the other “free” economies (qualified as “free” by scoring more than 80 out of 100).

Jean Dreze and Amartya Sen in their book Indian Development: Selected Regional Perspectives, more than a decade ago expressed how,

“Policy debates in India have to be taken away from the overwhelming concentration on issues of liberalization and marketization. The nostalgia of the old debates ‘Are you pro or anti market?’ or ‘Are you in favor or against state activities?’ seem to have an odd hold on all sides, so that we concentrate only on some issues and ignore many—often more important—ones.”

The debates on issues pertaining because of liberalization, marketization continues to still dominate most of the academic and policy discourses, whereas what is needed is a discourse today on how an economically “free” society can be created through the actions, policies, reforms of the state studied endogenously. It is critical to focus more on the role of the government in (dis)allowing more freedom to enterprises, households and financial institutions—the three key elements in the efficient design of an economy’s circular flow model of income generation.

Thus, the process of “broad based economic dynamism” can best be facilitated through the designing of policies that keep growth-inducing social development as a means to achieve economic freedom in a society as an end goal. Efforts at securing everyone’s development cannot rest purely on promoting more foreign investment internally, but structural efficiencies in guaranteeing the operation of rule of law, fiscal, monetary, labor freedom with the freedom from corruption must complement the benefits accrued from incoming foreign investment.