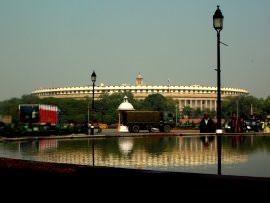 Aparajita Bharti is pursuing Master of Public Policy at Blavatnik School of Government at the University of Oxford. This article was originally posted in Deepening Democracy online series, responding to the September 2012 report by the Global Commission on Elections, Democracy and Security, on improving the integrity of elections on http://www.politicsinspires.org/

The Deepening Democracy report by the Global Commission on Elections, Democracy and Security discusses the importance of improving the integrity of elections. While fairness, funding and conduct of elections undoubtedly is a concern that citizens espouse worldwide, that in itself may not be a panacea to fulfill the function of representative democracy. Sometimes democracy itself is undermined in democratically elected Parliaments due to rules biased towards the elected government, and not giving sufficient power to opposition members and independent members of Parliament to voice their concerns.

The Indian Parliament tradition is Westminster style, where Members of Parliament (MPs) are elected from their respective constituencies through the first-past-the-post system. India has a multi-party system with members representing 39 parties and 543 constituencies. This diversity in the Parliament should provide a fertile ground for competing views to be expressed. However, this opportunity is severely undermined, by the power of the executive to decide and control the agenda and constrain legislative scrutiny, and the limited powers of private members (MPs who are not part of the cabinet).

The agenda of the Parliament in India is decided by the Business Advisory Committee, which includes leaders of all major parties in proportion to their representation in the Parliament. This effectively gives a veto to the government to avoid issues that might embarrass it and to avoid voting at all costs by dominating the discussion in the committee. The Government can also decide the timing and the duration of sessions of Parliament, allowing them to avoid a session in their weakest phases. The Indian constitution only mandates that there cannot be more than a 6 month gap between two Parliamentary sessions. Recently the government avoided voting on a controversial anti-corruption bill (Lokpal Bill 2011) by deciding the duration of the session and timing of tabling of the Bill.

In a modern Parliament, one would hope for stringent legislative scrutiny. The standing committee system in India severely limits the extent of such scrutiny: committees are constrained to consider only those bills referred to them by Parliament, which effectively lets the executive decide the legislation that is reviewed by them. Committees are not permitted to question Ministers directly, which constrains them from investigating any political reasons for proposed legislation. Committee meetings are not open to the public and notes circulated during the meetings qualify as ‘official secrets’.  This, some scholars believe, is good practice as it leads to less political posturing and more non-partisan analysis of bills within committees than the Parliament. There have been instances, however, when recommendations of these committees have wholly been ignored by the government and the Bills have been carried through in their original form, completely disregarding the non-partisan recommendations on the Bill.

Other rules that contribute to weak parliamentary oversight of the government are the strict anti-defection law and the precedent of not putting private member bills to vote.

The anti-defection law (Schedule 10 of the Indian constitution) requires Members of Parliament to only vote according to party whips on all Bills in the Parliament. If they fail to do so, they can be disqualified and asked to vacate their seat by the speaker. Although introduced in 1985 to maintain stability against a background of heavy defections, many feel it severely constrains MPs from voicing their own opinion and voting according to the constituency they represent. This also effectively means that the government carries every bill through that it puts to vote. The vice president of India, Mr Hamid Ansari is a strong advocate of watering down this provision. He suggests limiting the issuance of whips “to only those bills that could threaten the survival of a government, such as Money Bills or No-Confidence Motions” to balance both stability of government and freedom of MPs.

In a country as diverse and large as India, these Parliamentary rules, though shielded in a web of traditions, precedents and privileges, greatly affect the ability of the country to hold its government accountable. The recent chaos and dismal functioning of the Indian Parliament could have been averted if more accountability were built into the formal rules themselves. There is a need to further empower the legislators of the country to perform their oversight function better and further deepen Indian democracy.