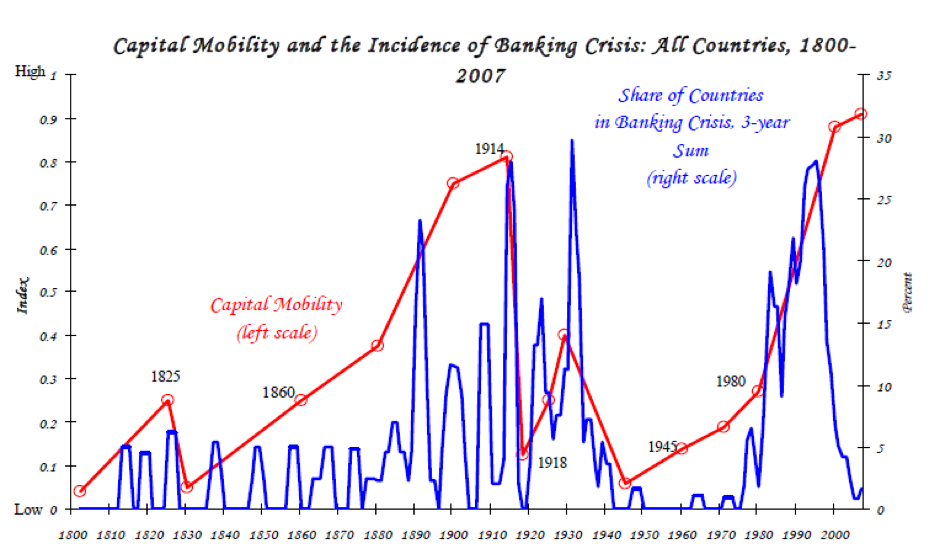 Traditional neoclassical economic theory suggests the movement of financial capital from rich to poor countries in search for a higher rate of return. In 1990, Robert Lucas Jr. in a seminal six-page essay contradicted the traditional thought using empirical data, which came to be later known as the ‘Lucas Paradox’. However, the paradox remains as apropos today given that the poorer countries of the world tend to run current-account surpluses (thus exporting capital) and the richer ones (most notably the US) tend to run current-account deficits (thus importing capital). In a recently published paper in the American Economic Journal, Francisco Buera and Yongseok Shin offer a new explanation to resolve the paradox. The findings have important lessons for the NDA government as it aggressively pushes for reforms by eliminating distortions in goods and capital markets.

Immanuel Kant, arguably one of the greatest western philosophers of all times wrote in his influential 1795 essay, “Perpetual Peace: A Philosophical Sketch”, “Among all the means of power subordinate to the regulation of the State, the power of money is the most reliable, and thus the States find themselves driven to further the noble interest of peace, although not directly from motives of morality”. While the Kantian view on increasing economic integration was primarily driven by considerations of war and peace, international capital flows and their management have become pivotal to the macroeconomic growth and stability of modern economies. As per the Reserve Bank of India’s (RBI) accounting system, capital flows consists of foreign direct investments (FDI), foreign portfolio investments (FPI), external assistance, external commercial borrowings and NRI deposits. Over the course of the last two decades, India’s net capital flows have surged from little over the US $500 million in the first quarter of 1990-91 to the US $25.38 billion in the first quarter of 2017-18.

While some commentators often associate India’s high growth during late 2000’s with high capital flows, it has largely been a link that has been unexplored. In the long-term, capital flows induce an efficient reallocation of savings and investment, however, managing capital flows in the short term is often a major policy challenge. In their dense masterpiece “This Time is Different” (2011), Carmen Reinhart and  Kenneth Rogoff, professors at Harvard Kennedy School and Harvard University respectively flag an important historical insight : Periods of high international capital mobility have repeatedly produced international banking crises, not only famously as they did in the 1990s, but historically.

Figure 1: Periods of high capital mobility have often been associated with higher incidence of banking crises

The traditional neoclassical technology models tell us that net financial capital flows should move from richer to poorer countries. That is, it should flow from countries that are capital-abundant and thus lower returns to those that are capital-scarce (higher returns)  and have greater investment opportunities. In a popular six-page essay “Why Doesn’t Capital Flow from Rich to Poor Countries” (1990), Robert Lucas Jr. of the University of Chicago points out an empirical paradox using the 1988 data: If the traditional neoclassical model were true, the rate of return on a unit of capital investment in India would be nearly 58 times more than the return one would get in the United States, yet the level of capital flows to India from the US were modest and nowhere near the levels the traditional theory predicted. The traditional neoclassical theory fails to imbibe the assumptions of cross-country differences in productivity and capital market imperfections. After accounting for cross-country differences in the fundamentals and capital market frictions, the risk-adjusted returns to investment should govern capital flows and therefore, should resolve the paradox. However, the paradox remains as relevant today given that the poorer countries of the world tend to run current-account surpluses (thus exporting capital) and the richer ones (most notably the US) tend to run current-account deficits (thus importing capital).

The paradox gets rather perverse when we move from absolute levels of income to income growth. In 2006, the Research Department of International Monetary Fund (IMF) in a paper titled, “Foreign Capital and Economic Growth”  authored by Eswar Prasad of Cornell University, Raghuram Rajan of Chicago Booth School of Business and Arvind Subramanian, Chief Economic Advisor to the Government of India (GOI) take the question of capital flows one step forward. They not only find evidence to support the intensification of the Lucas Paradox, more importantly, they observe that within developing countries, growth and foreign capital inflows were, in fact, negatively correlated. This meant that poorer countries which had higher amounts of net foreign capital inflows had lower economic growth than those that didn’t. Additionally, within the group of poorer nations, capital flows out of countries that grow faster. Interestingly, this relationship breaks down for developed nations, i.e. developed nations have a positive correlation between growth and foreign flows.

Prasad et.al argue that there could be a number of reasons why we see this anomaly between growth rates of developing countries and their foreign capital flows. Firstly, successful developing countries may have a limited ability to absorb foreign capital flows due to structural impediments in their financial sector. Secondly, it is possible that developing nations actively make the choice to avoid excess foreign flows to prevent overvaluation of assets. Finally, the authors conclude that as nations develop, structural impediments in their financial sectors reduce and their ability to absorb foreign flows increases – such that it can become a driver of growth, like industrialized nations, in the long run.

Figure 2: The composition of capital exporting countries has changed from higher to lower income countries and the Lucas Paradox seems to reinforce over time

It is important to understand the mechanism through which capital flows are captured. A current account surplus corresponds to capital flows abroad. In an open economy, capital flows also correspond to the difference between savings and investment. When savings are higher than investment, domestic agents are parking their savings abroad, while higher investment implies the opposite. For example,  China’s current account surplus with the US corresponds to China selling the US more goods than it buys from it. In exchange for this, China receives US dollars which it can use in numerous ways including buying US debt. Today, China owns US $1.1 trillion or about 28% of US debt held by foreign countries.

To explain these rather perverse findings of Prasad et.al, Francisco J.Buera of Federal Reserve Bank of Chicago and Yongseok Shin of Washington University (St. Louis) in “Productivity Growth and Capital Flows: The Dynamics of Reforms”(2017) focus on the relationship between growth accelerations in total factor productivity (TFP) and capital flows. They attribute the observational findings to the disparate dynamics of aggregate savings and investment behavior. For the readers, TFP accounts for the growth in output not accounted for by the growth in inputs used for its production and is often synonymous with improvements in the technological state of an economy. A rising TFP is necessary for a higher economic growth rate and therefore, investment in R&D is essential for sustained economic growth. Technically, a growth acceleration starts in a given year only if: a) average growth rate in the ensuing 7 years is above 3.5 percent and is at least 2 percentage points higher than in the preceding 7 years; b) the output per head in the ensuing 7 years is above the previous peak. Moreover, this acceleration is sustained if the average growth rate in the following decade is above 2 percent. For example, it is an established consensus that India’s only tryst with sustained acceleration happened in 1983 and the rest of the growth episodes have been mostly temporary.

Figure 4: Panels A and C show, respectively, the average of saving minus investment rates and TFP over the 33 episodes of sustained accelerations before 1980. The pre-1980’s negligible savings and investment gap confirms our understanding of limited capital flows.  Panels B and D show the average over 22 such episodes after 1980.

Buera and Shin present the following observations using data for 22 sustained growth acceleration episodes post-1980. First, in contradiction to the predictions of standard neoclassical models, capital flows out of countries experiencing fast growth in output and TFP. Second, this pattern is a lot more prominent in the early stages of these growth accelerations, where many of these nations undergo economic reforms. These first generation reforms are primarily concerned with the removal of idiosyncratic distortions (tax-cuts) in their economies. Finally, capital outflows reflect a surge in aggregate savings and a delayed rise in aggregate investment at the onset of sustained growth accelerations. Interestingly, when the reform is a far-reaching one – it removes goods market distortions as well as improves the health of financial institutions (second generation reforms) – capital flows into the countries experiencing faster TFP growth.

Figure 5: Net Capital Flows & Net Capital Flows as a percentage of GDP (RHS) for India since 1990. Note the peak of capital flows coincides with the Great Recession as ‘plata dulce’  moved around the world easily
Source: Authors’ Calculations and Bloomberg

Figure 6: Total Factor Productivity level growth in India, China, and the US. India has been on a rising TFP path.

Source: Authors’ Calculations and The Conference Board

India has had a long and chequered history with foreign capital flows.The first few decades after independence were characterised by import substitution policies which placed severe restrictions on the flow of foreign goods and capital, and it is only in the last few decades that foreign flows to India have really picked up. Arvind Panagariya,  a professor at Columbia University meticulously detailed the impact of reforms on growth and foreign capital flows in India in his paper India in the 1980s and 1990s: A Triumph of Reforms. He concludes that pre-1991 reforms were very important in helping India break away from the ‘Hindu rate of growth’, especially the import liberalisation measures taken in the 1980s. In the last two decades, both net foreign capital flows and GDP have grown substantially indicating a positive correlation, though this positive correlation is not as strong as the traditional neoclassical models predict. In light of the fact that there have been rising TFP levels in recent years as well, India must be careful to continue to maintain this positive correlation between growth and net foreign capital flows. Rakesh Mohan, in a speech in 2008 in his capacity as the Deputy Governor of the Reserve Bank of India said, “A large surge in capital [in]flows over a short span of time in excess of domestic absorptive capacity of the economy can lead to upward pressure on the exchange rate, possible overheating of the economy and asset price bubbles. They can also pose the risk of an abrupt reversal, which may have potential negative real economic effects.” It is important for India to pay heed to these lessons of appropriately managing capital flows by Rakesh Mohan, and the works of Prasad, Rajan, and Subramanian.

For this, it is important, as Buera and Shin point out, that reforms must be far- reaching, that is, they remove idiosyncratic distortions in goods markets and improve the health of the financial sector. On the upside, the Reserve Bank of India and the International Monetary Fund have collaborated to come up with a flexible inflation targeting (FIT) framework in their production version of The Quarterly Projection Model (QPM).  The QPM  is a forward-looking open-economy gap model, calibrated to represent the Indian case, for generating forecasts and risk assessment as well as conducting policy analysis. QPM incorporates several India-specific features like the importance of the agricultural sector and food prices in the inflation process; features of monetary policy transmission and implications of an endogenous credibility process for monetary policy formulation. It would be useful for policy guides to factor in the TFP response and capital flows movement also in the new model.

It is important that as the NDA government moves forward with goods and capital market reforms, policymakers keep these insights in mind.