Open defecation is more than a sanitation problem

Open defecation is more than a sanitation problem 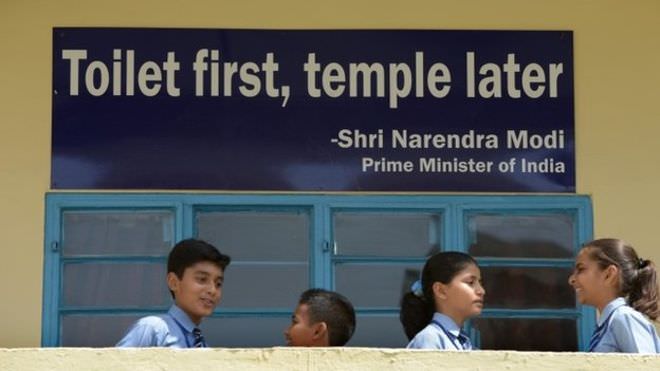 Rukhsat Hussain holds a masters degree in Human Rights from Aligarh Muslim University. He is working as a Senior Research Associate at Research Monitoring and Evaluation center of the SM Sehgal Foundation. His areas of expertise include qualitative and quantitative research on water, and sanitation.

“I make my children sit on the wooden legs of the cot if they get nature’s call at night so that the pressure can go up, because I cannot take my young kids for defecating alone at night,” explains Kanta of Hamirpur village in the Alwar district of Rajasthan.

India has far higher open defecation rates than other developing regions where people are poorer, literacy rates are lower, and water is relatively scarcer (Diane Coffey et.al, 2017). Improving sanitation is crucial to gear the development process in India whose sanitation performance has been unsatisfactory even after a program for better sanitation has been in place since 1986. With the ever-growing population, the government and civil society continue to grapple with the issue of sanitation taking into cognizance that 53 percent Indian households still do not own a toilet (Census, 2011). Poor sanitation is an issue that affects everyone but women are often the most at risk. Open defecation is more than a sanitation issue—the lack of a safe, clean and secluded space to defecate specifically hurts women by drastically limiting their daily freedom. “Women in India who practice open defecation are prone to sexual violence and infrastructure improvements can provide them with some level of protection,” (The Indian Express, 2016).

Kanta’s solution for the lack of safe spaces for defecation is certainly not uncommon. On a recent Sehgal Foundation research team visit to the five-villages[1] Samra Panchayat (village council) in Thanagazi block, many women described similar issues relating to open defecation. In this block, only five out of 1,409 households[2] had toilets before 2014, and those five were nonworking. Women described avoiding defecation in the dark due to their fear of wild animals, such as lions, boars, etc., in the nearby jungle, and there is no other place available. Men never accompany them and they often feel too shy to ask other women to accompany them. Several women either do not eat or reduce their food intake to half after dark to avoid the need to defecate.

The unease for girls, new mothers, and elderly women

Young girls must go even farther away during their menstruation, searching for isolated places where male members of the family cannot see them defecate. They are always wary while changing clothing as well. The absence of toilets further worsens the plight of ill and pregnant ladies who cannot walk long in search of a place to defecate. Elders and women suffering from diarrhea are therefore forced to defecate close to the houses, leaving a bad smells behind and fecal matter that becomes a breeding place for houseflies/insects, which puts the health of everyone in the family at risk.

Meanwhile, men seem to be comfortable defecating openly. Being farmers, they need to visit their crop fields early in the morning, which is the preferred defecation time for most adult men. They do not wait for someone else to accompany them to defecate or wait for the cover of darkness as women usually do. Unlike women and girls, males do not “schedule” defecation but rather defecate whenever the need arises, either on their way to or returning from their fields.

Discussions also revealed that inhabitants have different views about the construction of toilets. The figure below shows the common and differentiating factors that support and resist toilet construction as perceived by men and women.

The population has not been made aware of all the initiatives taken by the government of India to encourage toilet construction. The Government of India has launched various sanitation programs starting with the Central Rural Sanitation Program in 1986 to the Swachh Bharat Mission in 2014 to promote toilet construction because it affects the dignity of women and girls the most. The Swachh Bharat Mission to clean India’s cities and villages provides a revised monetary incentive to individuals who live below the poverty line and identified above-poverty-line households. This includes up to INR 12,000 for the construction of one individual household latrine with water availability, including water for hand washing and cleaning of the toilet.

The Sehgal Foundation, in collaboration with the Coca-Cola India Foundation, intervened in these villages in 2014 with the aim of mobilizing and sensitizing communities towards health and sanitation issues leading to toilet construction. Foundation staff used information education and communication materials such as pamphlets designed in an easily comprehensible manner by the community for conducting trainings on the benefits of constructing toilets, emphasizing clean surroundings, safety, and ease of use. These trainings were conducted every month separately for males and females in the villages to address the sanitation issues and spread awareness about the Swachh Bharat Mission and its monetary incentives for toilet construction.

The outcome of this community mobilization and awareness has been toilet construction in 25 to 30 percent of the households. However, some of the  households with toilets are not using them indicating that  understanding the motivation for using a sanitation facility is as or even more important than access to the sanitation facility. Open defecation continues to be a socially and culturally accepted traditional behaviour by the community. Females reported that males are often not supportive of toilet construction, but some women mentioned that lack of water and money prevents us from not having a sanitation facility.

A long way to go

Sehgal Foundation mobilized and sensitized the community towards health and sanitation issues and as a result the community started to construct and use toilets. Our learning from the project is that the major thrust of all sanitation campaigns should be to promote attitudinal change that will create demand and further lead to improved access. In the long term, behavioral change communication, which varies across age and gender, is imperative to sensitize people to use sanitation facilities and appreciate the positive aspects associated with it. Any sanitation intervention, instead of merely achieving targets, needs to consider the above aspects to   develop adequate and holistic approaches to behavioral change in sanitation.

[2] As per the baseline study conducted by the Sehgal Foundation