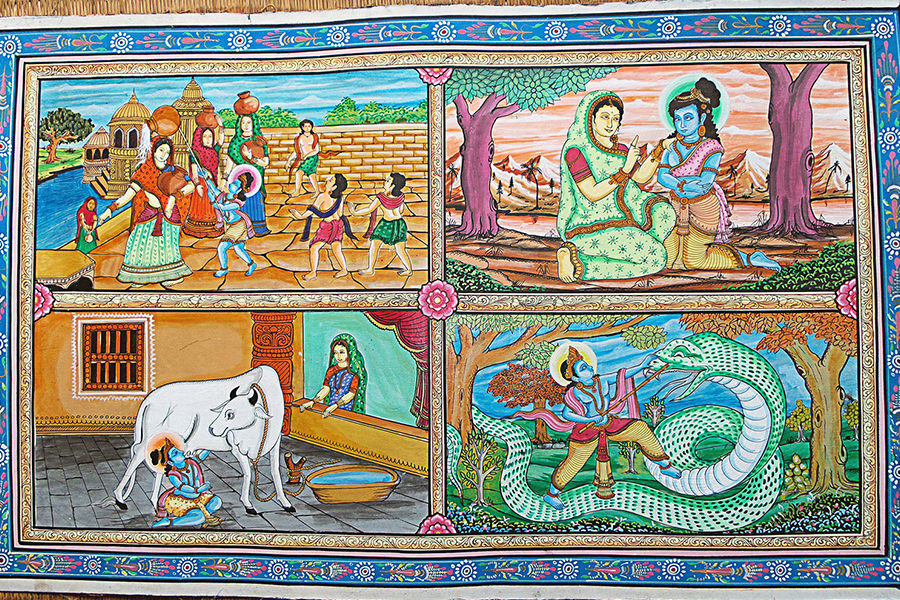 This is the 21st century that we live in- the era of overwhelming technological progress, leading to innovations such as the internet, a global digital platform that has transformed our concept of space and time entirely. More than ever, information defines our lives as it is the basis of advancements, a hallmark of progress. But this quenching thirst for advancement has caused us to abandon our past, swiftly exchanging it for the elusive promise of the future. Yet, the past is important. The past provides the basis of not only cultural but individual identity and that is slowly being pushed aside. It has become overwhelmingly clear that traditional means of cultural and heritage preservation have failed in India. This is because of an array of reasons, most importantly a lack of awareness. Unlike the states  of Europe, India does not have a tradition of preserving the past. Consumed by embracing the future, the past in India is often associated with primitiveness. Thus, it has become an unspoken norm that in order to embrace the future, the past needs to be diminished. This has resulted in the death of several folk traditions across the country.

However, not all is lost. The recent decades have seen an interesting intersection between commercial and artistic interests. This intersection, though seemingly unconventional has led to the revival of several folk traditions in India. It has led to an overhaul of the Indian handicraft industry where artisans are becoming increasingly entrepreneurial and are appealing to the wider clientele by diversifying their traditional artistic themes and are creating new products with their visual traditions. Thus, today’s market is filled with products include home décor, stationery, clothing, jewellery, toys, featuring various handicrafts. While these commercial products that cater to the wider public and are seen to be purely decorative, breaking away from their traditional role as religious or educational tools, as Indian folk traditions usually were. Despite this, it has led to an unlikely sustenance of Indian folk traditions as it appeals to the wider public. But in order for these rich traditions to truly be preserved, they need to be conserved and sustained. Thus, I take the example of Pattachitra, that has made an unconventional revival in the recent decades through this intersectionality of commercial and artistic interests.

Like many folk arts, Pattachitra was a family-oriented tradition that was passed down  generation to generation, right from the construction of the Lord Jagannath Temple at Puri, Odisha and soon spread across the state of Odisha, and to its neighbouring state, West Bengal as well. As a result of this, Pattachitra became visual chronicle of is the Hindu temple traditions. Eventually, Pattachitra artists began to feature scenes of Hindu mythology from religious texts such as the Ramayana and the Mahabharata. The term itself is derived from the Sanskrit words, Patta meaning cloth and Chitra translating to picture, denoting the traditional form of the folk art.  Pattachitra today is characteristic for its two-dimensional characteristics, expressive features and limited color palate.

Traditionally, Pattachitra was painted on cloth derived from the old cotton sarees of the local village women and was treated with chalk powder and gum and is smoothened with stones to make an even surface- a process that can days to complete. Following this, the painting process began with the border that dictated both the theme and the color scheme of the painting. The paints used were derived from natural minerals and herbs locally available to the artists, leading to a limited but vibrant palette, in which the intensity of colour was changed by diluting the mineral and herb pastes.

As a result of this, the paintings were colorful renditions of the temple traditions of the Lord Jagannath temple at Puri, Odisha, Gods and Goddesses from Hindu mythology, as well as scenes from Hindu religious texts such as the Ramayana and the Mahabharata. Therefore, Pattachitra was first used as an educational tool, allowing the adults of the community to teach their children about their cultural values and norms through colorful paintings. However, due to the heavy interplay of Hindu mythology and temple customs, the women were only allowed to prepare the raw materials such as the paints, the patta, and the border, while it was the men who actually painted the scenes.

Yet another form of Pattachitra is called Bhitti chitra, where a white outline becomes a distinguishing factor for paintings on walls and other such mediums. Unlike the other two forms, Bhitti chitra is purely decorative and thus, is a popular design on many Pattachitra products in India today.

Despite the rich tradition and variety of Pattachitra, like many other folk arts, Pattachitra also is suffering a slow death. This is mainly the product of a rapidly changing lifestyle where, leading to increased migration from the villages to the cities in search of increased job opportunities has seen in a sharp decline of populations. This migration is mostly due to the lack of support and regulation from the Indian government in the handloom and handicraft sector, forcing artisans to abandon traditional livelihood choices for employment in other sectors such as agriculture and construction. Additionally, increased automation in most aspects of our lives has led to the unwilling death of many industries, and has had particularly adverse effects for the handicraft sector which is unable to keep up with the proportionally growing demand. As a result of this, the population of full-time Pattachitra artists has been on the steady decline. Moreover, geographical constraints of the artists who live in remote villages discourage them from directly interacting with the market, business owners and customers alike. They are unable to market their products- their skills and accomplishments often underappreciated and forgotten. This alienates the progressive urban centres from rural India, serving to endanger the art form and tradition further.

The recent decade has seen an increased private interest in the cause of Pattachitra revival. The most significant of these interests has been the intersection of artistic and commercial interests through INTACH’s (Indian National Trust for Art and Cultural Heritage) branding of Ragurajpur as the “Crafts Village of India” in 1998. At the time, the village had roughly 700 inhabitants, most of whom were involved in at least one visual or performing art tradition. These traditions included pattachitra, stone and wood carvings, cow-dung and paper-machie toys and masks, as well as Gotipua- a traditional dance form native to the state of Odisha. Yet, most of its inhabitants, though highly skilled and accomplished, did not take up these visual and performing arts as full time trades. Instead, the most common profession was seen to be agriculture as several coconut groves and betel leaf plantations surrounded the village. Thus, these visual and performing arts were found to be a part of their own cultural heritage, passed down generation from generation within the family itself. Furthermore, Ragurajpur was very accessible by road, approximately 10 kms away from Puri, the famous Hindu pilgrimage site.

All of these factors made Ragurajpur the ideal location to test out INTACH’s “revival programme” according to which, artists and masons were provided with formal training to learn the various types of folk traditions that existed within the village of Ragurajpur. While doing so, they were encouraged to diversify their traditional designs, making their products more accessible to a wider clientele. In order to support this revival programme, business owners hotels, and other interested clientele were encouraged to commission Pattachitra pieces in order to increase the demand and spread awareness. This would be the first truly successful example of cultural tourism in India and would become a model for rural tourism in India, an absolutely untapped market.

The programme saw a dramatic change to the lives of the people of Ragurajpur. With increased publicity, new employment opportunities resulted in increased conservation efforts of the folk traditions and rich cultural heritage native to Ragurajpur. Working on a commission, artists were able to enjoy a steady income throughout the year, even during low tourist seasons. This was a dramatic change from the seasonal employment that the people of Ragurajpur had been relying on previously. Furthermore, increased employment opportunities also encouraged women and the youth, who now were involved in conservation efforts to support their relatives. Additionally, increased commercial interests also saw infrastructural development in Ragurajpur. These included an open-air theater, restaurants, a tourist lodge, a gurukul, and a crafts center. Accessibility to Ragurajpur was also improved to encourage visitors to come to the village. Thus, Ragurajpur became its own economic ecosystem due to the intersectionality of commercial, economic and artistic interests. It was testament to the fact that India had the potential for ecotourism to be successful.

Ecotourism in India: Can it be done?

INTACH’s “Crafts Village” proved that India has great potential for ecotourism. A country filled with diverse traditions, its cultural heritage and past remain unknown to most of the world and Indians alike. This is mainly because of the increasing globalization in part, and also because of the changing world around us. Increased urbanization has led to mass immigration to India’s urban centers, because of which local traditions and heritages are often abandoned. Moreover, increased globalization has led to the youth embracing a Westernized lifestyle, rooted in financial success. Moreover, the lack of regulation of the handicraft industry has led to several folk traditions often dying out. State support is minimal, if at all. Clumped under the overarching title of “handicrafts,” individual folk traditions are often diminished and thus, simply unsupported. Accomplished artisans are often overlooked with the assumption that their creation is a product of the primitive beliefs and value systems of rural India. In this struggle to embrace the modern, the rich cultural heritage of India is often forgotten. Yet, INTACH’s revival programme speaks otherwise. With an intersection of commercial interests, India’s past can be marketed to a wider clientele given ecotourism.

However, for it to succeed, state support is integral. While commercial interests to sustain an independent economy, state regulation is required- particularly that with the GST. Today, handicraft goods are burdened under a 12% tax according to the new GST regulations. With such a high taxation rate, large business owners would be hesitant to invest in cultural tourism and the conservation of handicraft goods. Moreover, small business owners would be further discouraged to invest in cultural tourism, fearing bankruptcy and failure. Thus, GST should be regulated casewise, taking into account the various traditions that exist within the handicraft industry in particular.

Though there has been a diffusion of the traditional themes and roles of Pattachitra, a revival of the tradition has been seen in the recent decades, indicating increased interest and awareness of the folk art. In particular, the introduction of new products and themes to the traditional folk art has gathered increased attention, both across the country and the globe. Therefore, this unique intersection of commerce and cultural preservation has led to a revival in the dying art form. But to ensure its continued preservation, a lot more has to be done. Commerce alone cannot ensure the survival of Pattachitra. . A legacy from the 12th century, the artistic and historical value of Pattachitra to the local communities of West Bengal, Odisha and India is incomparable and thus must not be lost to the rich pages of Indian history.