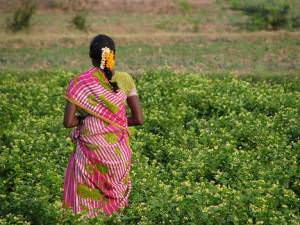 Maria Teresa Silva Porto and Brittany Urick are Master of Public Policy students at the Blavatnik School of Government, University of Oxford.

Food security ranks among the most pressing and inertial problems in India. According to the Food and Agriculture Organization of the United Nations, India’s malnutrition rate has hovered around 20% over the past decade and is projected to remain stable through 2022. One might assume that malnutrition results from insufficient food production, but India is actually a net exporter of agricultural products. Storage and distribution are the primary obstacles, as a significant percentage of food meant for domestic consumption – especially in rural regions with poorer populations – never reaches its intended destination.

Broadly speaking, a GM crop is a plant whose genome – the entirety of an organism’s hereditary information – has been altered through genetic engineering to express a characteristic the plant does not naturally possess. For instance, in the case of Bt cotton, the only commercialized GM crop in India, the genetic information of the cotton is manipulated so that it can generate a toxin that is lethal to certain insects, which results in a pest-resistant crop.

But is this a risky technology? This question has no easy answer, as one must distinguish between the endogenous risks of the technology and those related to the implementation of the technology in different sociopolitical contexts. Regarding the former, the bulk of the literature suggests that GM crops are genetically stable and that consumption of edible GM crops (currently not grown in India) poses no risk to human health. However, other uncertainties remain, such as the risk posed by the gene flow from GM crops to wild-type strains.

The risks of implementation are much greater. First, it is important to highlight that the codification of biosafety regulations is not sufficient. The state needs capacity to enforce them; otherwise considerable environmental risks deriving from improper cultivation and poor management practices can result. Additionally, it is unclear whether GM crops contribute to poverty alleviation.

There are two ways in which GM crops can be related to the food security debate in India: 1) Indirectly, or the economic and social impact that GM cash crops have on the farmers that grow them; and 2) Directly, or the possibility to grow GM vegetables that can increase the availability of and access to nutritious food.

The indirect channel between food security in India and GM crops refers to the impact that growing GM crops such as Bt cotton has in alleviating poverty. Higher crop yields and less pesticide usage are the main advertised benefits of GM crops. It is often argued that poor farmers can benefit from growing GM crops, as larger and better quality yields raise farmers’ disposable income, which can be allocated towards food. But is this the case? It can be, but there are several barriers that often prevent poor uneducated farmers from reaping these benefits, namely:

GM crops could also impact food security in a direct way, that is, if the Indian government allows farmers to grow and commercialize edible GM crops. But is India’s food security problem a matter of insufficient food production?  Given India’s status as a net exporter of agricultural products, it could theoretically sustain its population. There exist significant distributional gaps within the country, meaning that India’s resources are shared inequitably, and the primary causes of this inequity are actually rooted in infrastructure. Distribution and storage capacities are poor and results in mass spoilage: “More than one-half of the wheat and over one-third of the rice get “lost” along the way, and a good fraction gets eaten by rats.”[1]

So, can GM crops help to improve food security in India?  It seems that GM technology is safe for human consumption and could potentially help feed a growing population. However, since production does not seem to be the primary problem, more pressing issues should likely be prioritized in order to addressing food security, namely, the promulgation of the National Bill on Food Security and the improvement of distribution and storage infrastructure. Additionally, policies that could improve the indirect impact of GM cash crops on food security should be strengthened: build capacity to monitor and enforce biosafety regulations; improve the access to objective information of farmers regarding the scope, risks and limitations of GM technology; encourage competition among GM seed providers; and improve credit systems.