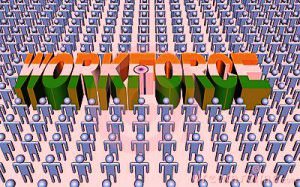 Demographic dividend is a term that policymakers have associated India with for some time now. The percentage of India’s population in the age bracket of 15-64 in the year 2016 is projected to be 67% and around 68% in 2026, of the total population. Considering the rapid pace of population increase in the country, the sustained percentage share of ‘able’ population says much about the changing demographics which are favour of India. However, this boon leads us to the long-run question – where will the good jobs come from for the ‘able’ population?

Conventional growth theory says that a steady growth rate of the economy should result in job creation consistent with the growing demand of the economy. Assuming that technology and labour productivity are constant and there is no deficiency of aggregate demand, then the rate of growth of employment would naturally rise with the rate of growth of output. In the case of the Indian economy, the output is certainly rising yet it is weighed down by its jobless growth. This could mean that either technological progress or increasing labour productivity is compensating for the increase in employment which should actually rise due to increase in output.

However there is no significant evidence to substantiate the fact that labour productivity has infact increased or that innovation in technology has offset the employment growth rate. More than half the Indian population depends on agriculture for livelihood. Even though the total share may have reduced, in terms of absolute numbers agriculture continues to employ more people than ever.  While industry is creating jobs, too many are low-productivity non-contractual jobs in the unorganized sector offering low incomes, little protection and no benefits. Services are the fastest growing segment of the Indian economy, yet the employment growth has been slow.

Research shows that the reason to enter or exit the labour market is a function of household earnings, which are governed by changes in macroeconomic policies and sectoral patterns of growth. Demographers divide the long term trend of employment and unemployment in two phases – pre and post 1993 – clearly accounting for the change in the economic paradigm. The unemployment rate (usual status adjusted) captured in the 43rd National Sample Survey (NSS) (1987-88) was 21 (rural) and 57 (urban), per 1000 persons in the labour force. The next NSS round of 1993-94 reported unemployment rate as 11.5 (rural) and 51 (urban). Considering demographic and educational attainments have changed only gradually, this trend suggests a high sensitivity to economic conditions, particularly for a large majority of the population that is at the margin of poverty.

Experience shows that India has been exposed to two characteristic features of the labour market. First are the predominance of agriculture and the informal sector which implies that a majority of the workers are self-employed in low quality employment resulting in slow growth of labour productivity. Secondly, widespread poverty and distress lead to a situation of vulnerability – where participation is not out of choice but is based on changes in income levels. These two factors result in scenarios that go against the traditional approach of a linear relationship existing between output growth and employment creation.

Setting aside the above mentioned contradictions, what are the structural impediments that are resulting in jobless growth that we see today? The latest economic survey gives one an idea as to what the problem may be. For instance, too many large firms prefer to employ temporary contract labour and machines rather than train workers for long-term jobs. In the case of MSME’s (Micro, Small and Medium Enterprises), one would find the dominance of micro enterprises (94.9% of MSME’s in India are micro) while medium enterprises are practically non-existent (0.2%). Too many firms in India prefer to stay small, unregistered, unincorporated, largely informal or in the unorganized sector because they can avoid regulations and taxes. These firms have little incentive to invest in upgrading skills of largely temporary workers, resulting in low productivity of labour.

Raising credit continues to be difficult in India. Poor banking coverage in rural areas, in addition to bureaucratic procedures for loan approvals and limited discretionary authority of branch managers add to the problem. Angel investors and venture capital funds are still at a nascent stage. Moreover these investments are biased towards services that generate high output but do not necessarily result in employment generation. A vibrant corporate bond market is possibly the quickest way to free up space for MSME’s loans, as large firms will be able to access bond financing, for say infrastructure projects, over long-term.

The per capita income growth trends across countries suggest that the greatest share of growth comes from a rise in labour productivity. In India, the labour force participation has fallen annually – 430 per thousand persons in 2004-05 to 400 per thousand in 2009-10 – resulting in no addition to growth. Surprisingly, the increase in share of working age population or demographic dividend, seems to add only a little to growth. Evidently, falling labour force participation and labour productivity, coupled with the indication that the dividend in demographics add little to growth, is reflected in India’s slow employment growth rate.

Changing trends of workforce structure have always been a concern for policymakers. Optimists, who truly believe in the potential of India’s demographic dividend, never fail to elucidate the forward beneficial linkages associated with the dividend – more working age people will mean more workers, especially in the productive age groups, more incomes, more savings, more capital per worker and more growth. Undoubtedly this is ideal but this concept comes with a plethora of assumptions. A larger work force translates into more workers only if there are productive jobs for them.

With the labour force participation rate expected to rise significantly in the coming years, it is imperative that the government formulates a common policy on business development and regulation. India’s high economic growth story cannot be taken for granted. We could find ourselves to be one of those economies that had great potential but ultimately fell short in the long-run. History is replete with such examples.