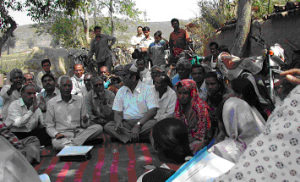 Uthara Ganesh is a governance and policy professional from New Delhi, India. She currently works on a Consumer Policy and Protection Project jointly implemented by the Ministry of Consumer Affairs and the German Development Co-operation (GIZ).

In recent years, the idea of civic engagement and participation has placed itself at the nucleus of development policy. Following from a severe critique of the rigidly centralised, large-scale public investment driven development policy followed in the 1970’s and mid 80’s, the early 90’s saw a renewed interest in the potential of participatory governance. Noted economists such as Amartya Sen brought to the fore of development discourse the idea of  ocial capital, making a substantial case for a bottoms up, participatory approach as a more effective and desirable means of delivering governance.

Effectual public policies, it was argued, would necessarily have to accrue from the very communities they were intended to serve. The top down, investment focussed approach was deemed inherently exclusionary and subversive. In contrast, one that placed civic participation at its centre, was regarded to have an assortment of advantages – it would foster the ideals of equity and democracy, reduce poverty, improve the functioning of public service delivery mechanisms, build civic capacity for collective action and also assist in the creation of robust, accountable public institutions.

What therefore ensued was a large scale move towards promoting participatory development as a mechanism for governance amongst major development policy stakeholders. The World Bank alone, it is estimated, has spent as much as 85 billion dollars in the last decade, in development assistance for programs that sought to increase community participation. The Government of India(amongst a host of others) has also taken keenly to the idea of participatory development, with each of its flagship social sector programs having incorporated the concept into pivotal planning, monitoring and audit functions.

In this light, it is imperative to assess the extent to which the participatory approach has yielded results. Earlier this year, the World Bank released an incisive study authored by Gazala Mansuri and Vijendra Rao that closely scrutinized evidence from almost 500 publications to examine just how successful the approach has been in achieving its multifarious policy objectives.

In outlining the scope of their study, the authors make a useful distinction between what they term as ‘órganic’ and ‘índuced’ participation. Organic participation, they state, usually arises as an organised response by civic groups, often in opposition to the state (or other power wielding institutions). The Right to Information movement spearheaded by the Mazdoor Kisaan Shakti Sanghatan in India and the anti-apartheid movement in South Africa are both excellent instances of organic participation. The actors driving the movements in both these cases were internal to the communities.  Induced participation, on the other hand, are institutionally or bureaucratically managed development interventions that are aimed to ‘promote’ or create civic participation in a community. These would therefore include large development programs run by donor agencies, bi-lateral organisations and governments. Compulsory social audits – that are mandated by schemes such as the Mahatma Gandhi National Rural Employment Guarantee Scheme are a fitting example of mechanisms that  seek to ‘induce’ participation – with the main drivers – (in this case bureaucratic leadership)  usually external to the community. Mansuri and Rao focus their review on participatory mechanisms that are externally induced.

Civil society bodies (essentially the main driver behind any development intervention designed to induce community participation), like markets and governments, – are also vulnerable to the familiar failures of internal co-ordination, inequality and poor efficiency and management.  Does a review of the evidence show the kind of large scale, institutionally driven, induced community participation to be more successful in delivering outcomes than the former two approaches? Mansuri and Rao’s findings do not cogently state so.

Has the participatory approach worked in the accurate identification of beneficiaries?

The study throws up a number of findings that do not seem to suggest the relative superiority of a decentralised, participatory system of beneficiary identification. Citing research, it asserts that a centralised mechanism may actually work better in identifying the poorest communities, even though a localised approach was more suited to identifying the poorest households within communities. Evidence from the study actually suggested that local identification mechanisms worked best when centrally incentivized to correctly identify the intended beneficiary. The most successful targeting strategies were not purely ‘decentralised’, bottoms-up processes.

Localised identification is often vulnerable to rent seeking by influential local players, and often exclude those most in need.  This is particularly true of highly demand driven programs, where significant benefits are disbursed by the state. A clear case in point is the identification of individuals living Below the Poverty Line (BPL) in India, a thoroughly decentralised process that is replete with problems of exclusion and fraudulent identification due to widely prevalent rent seeking practices.

Does the induced participatory approach work best in the management of common pool resources?

The participatory approach has been unquestionably successful in the comparatively sustainable use of natural resources. With regards to redistribution of these resources within communities, however, a positive co-relation was found between high socio economic heterogeneity and unequal access – the rich and influential were disproportionately benefitted.

The scope of outright rent seeking was considerably reduced when communities participated in decisions with regard to the creation of infrastructure. As with other indices however, rent seeking tended to affect the level of access and distribution within communities. It was also seen, that large scale donor driven projects often failed to recognise the capacity of communities to understand the technical nature of some projects and partake in their maintenance in the long term, thereby limiting impact.

While improvements were seen in some communities in the delivery of healthcare and education services, the authors suggest that a strong causal link to the role of community engagement in enlisting this impact could not be established. Most programs undertook a host of activities that contributed to its success, not all of which were strictly ‘participatory’ in nature.

What is also significant is that a strong variability was noticed in the levels of success attained by different programs operating in different countries. Mansuri and Rao therein underscore the great importance of context. Programs will only succeed when they thoroughly factor in the importance of the specific operational realities of the communities they are run in. Induced participatory projects run by large institutions, the authors assert, have failed to do so. They note, “ Despite wide differences in contexts, the Project Assessment Documents of World Bank–funded projects (which lay out a project’s design) are striking in their similarity..”

It is imperative that policy be informed by rigorous and accurate assessments, and not the empty sanguinity of catchphrase rhetoric. While civic engagement is highly progressive and desirable, programs that have invested elephant sums, claiming to induce participation would do well to make tough internal enquiries with regard to their level of success. Sound development programs will have to be informed by rigorous systematic analysis that continually incorporates learning from failures, and cannot be sustained merely by optimistic dogmatism.