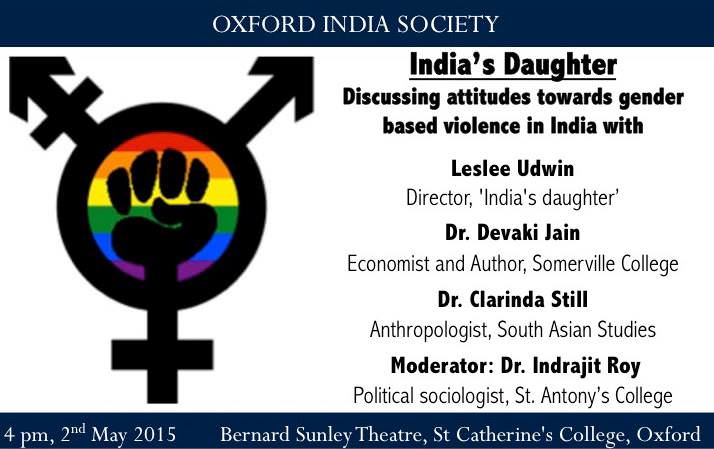 In light of the recent debate surrounding the documentary 'India's Daughter' by Leslee Udwin and its ban by the Indian government, Oxford India Society is hosting a panel discussion on the issue followed by Q&A.

The speakers include:
Leslee Udwin, a British filmmaker who directed the documentary film 'India's daughter'. She also produced the films West is West and East is East (1999), and has also acted in various films and television series

Dr. Devaki Jain is an Oxford alumna who taught economics in Delhi University for 6 years. An institution-builder, she founded the Institute for Social Studies in Delhi which has been at the forefront of research on economic development with special reference to women as workers. She has many publications to her credit, most notable being Harvesting Feminist Knowledge for redefining progress.

Dr Clarinda Still, an anthropologist at the Department of South Asian Studies at the University of Oxford.

Moderator: Dr. Indrajit Roy is a political sociologist and ERSC Research Fellow at the Department for International Development at Oxford University.