The Changing Tide of India-UK Relations: Past, Present and Future; 23rd February 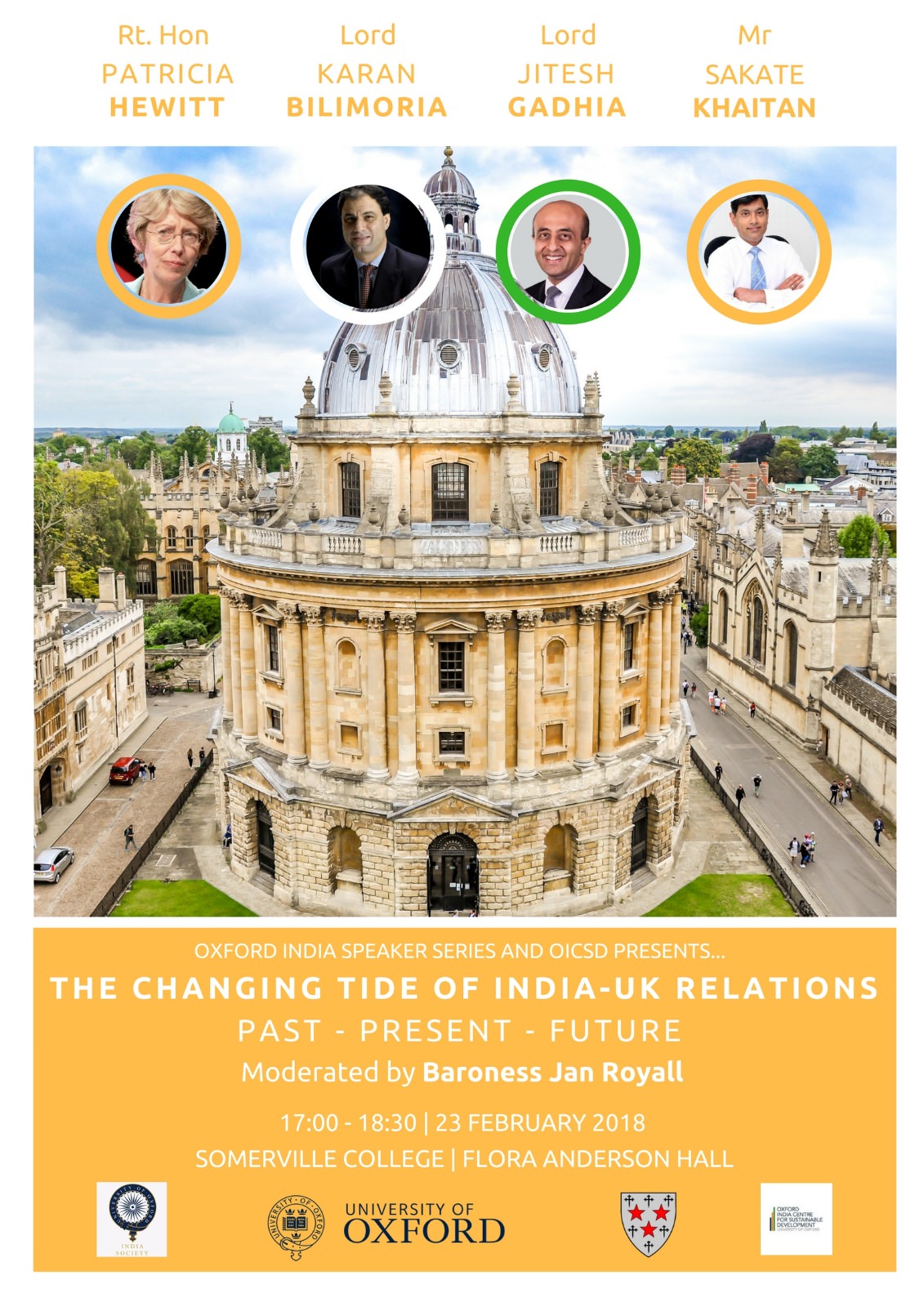 || The Changing Tide of India-UK Relations: Past, Present and Future; 23rd February ||

Somerville College and the Oxford-India Society presents this Speaker Series Event. Last year the UK and India commemorated 70 years since partition. Britain has long and complex ties to India, as Brexit approaches there are vital questions around the UK's future relationship with its former colony. What scope is there for the UK to forge a special relationship with India post-Brexit Britain.

Baroness Jan Royall; the Principal of Somerville College. Jan has had a distinguished career in politics, notably becoming Chief Whip in the Lords, appointed to the Privy Council and in 2008 became Leader of the Lords and a member of the cabinet.

Rt Hon. Patricia Hewitt; the former chair of the UK India Business Council (UKIBC), the premier business-to-business network that works with the British Government to promote bilateral trade between the UK and India. She served in that position for almost nine years. She was also a former Labour Cabinet minister until 2007.

Lord Karan Bilimoria; the Founding Chairman of the UK India Business Council, He is a founding member of the Prime Minister of India’s Global Advisory Council. In July 2014, he was installed as the seventh Chancellor of the University of Birmingham. He is also co-founder of Cobra Beer.

Lord Jitesh Gadhia; a member of the House of Lords. He is also a board member of UK Government Investments and UK Financial Investments. Gadhia is a director of BGL Group. He has over 25 years of investment banking experience and previously held senior positions at Blackstone, Barclays Capital, ABN AMRO and Baring Brothers.

Mr Sakate Khaitan; is the senior partner of Khaitan Legal Associates and heads its corporate, insurance and financial services practices. He has extensive experience working with Indian and Foreign companies, HNI's and Government Authorities/companies.

Ambassador Dinesh Patnaik; is the current Deputy High Commissioner of India in the UK since 2016. He is a career diplomat of the Indian Foreign Service for over 25 years, serving in highly placed positions in locations such as Dhaka, China, Vienna and Morocco. Between 2007-2009, he served as the UNES Director/Joint Secretary, overseeing works relating to the UN.